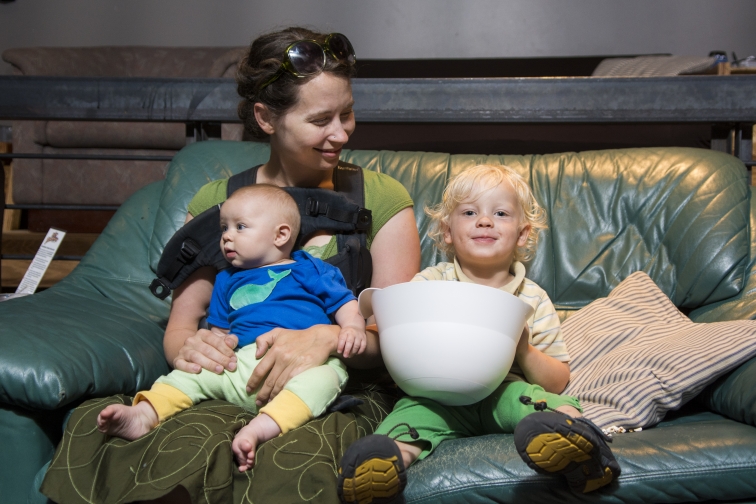 Catch a flick at the New Parkway Theater

Fun is always on tap at The New Parkway Theater, located in Oakland’s Uptown district.

The quirky, independent movie theater offers inexpensive tickets for second-run movies, and serves locally-sourced beer and wine, plus a full menu from its café right to your theater seat. And in The New Parkway’s case, those seats are a collection of cozy couches, comfy armrests and dining room chairs furnished like a living room. 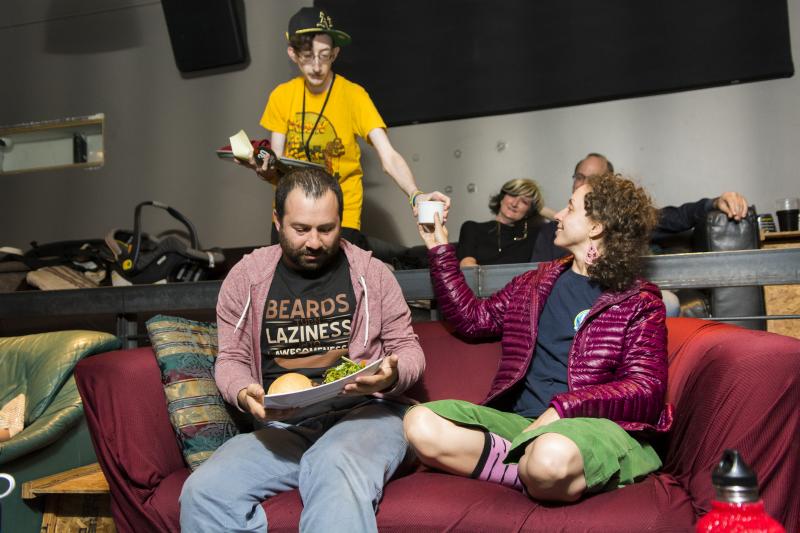 The all-ages theater hosts a selection of mainstream and independent films, plus theme nights and non-film events (such as trivia challenges, Art Murmur tie-ins and retro game nights) – all for under $10.

“It’s all about the community,” said Moses Ceaser, general manager of The New Parkway Theater.

The New Parkway opened its doors October 2012, and is the reincarnation of the Parkway movie theater, which closed in 2009. The new, 7,800-square-foot location occupies an industrial-looking space along 24th Street on the outskirts of the city’s growing art district, and includes a café and two screening rooms (which seats a combined total of 270 people). 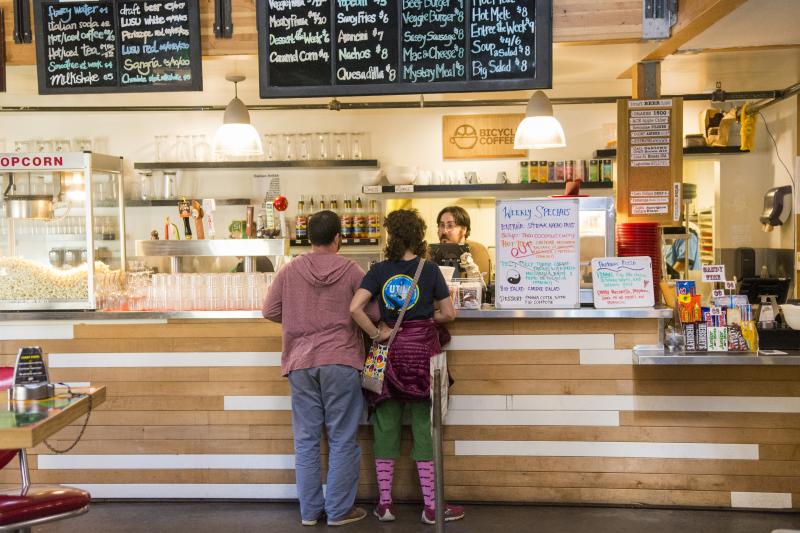 The venue itself is a community showcase: the walls are covered with aerosol art by area artists, the café’s tabletops and walls are adorned by work from Creative Growth and patrons can write their own message with chalk on the walls of the restroom.

Ceaser is one of 56 investors of The New Parkway, and they all subscribe to a philosophy that puts people over profits. In that spirit, The New Parkway routinely partners with local nonprofit organizations and filmmakers to host community events and fundraisers. 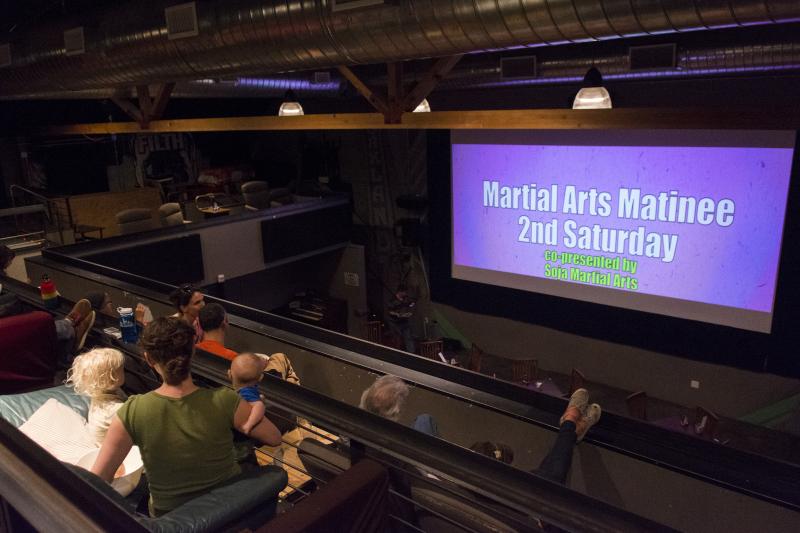 “It’s not important to see financial return on investment,” Ceaser said. “We were patrons at the old theater, and loved the fact it was local and engaged people. We wanted to carry on the torch of what is an Oakland institution.”

The café includes an eclectic mix of comfort food (including stick-to-your-ribs macaroni and cheese and pizza), plus 12 rotating taps of local beer and wine. The kitchen also offers vegan, vegetarian and gluten-free options, and does not serve foods that contain high fructose corn syrup or palm oil. 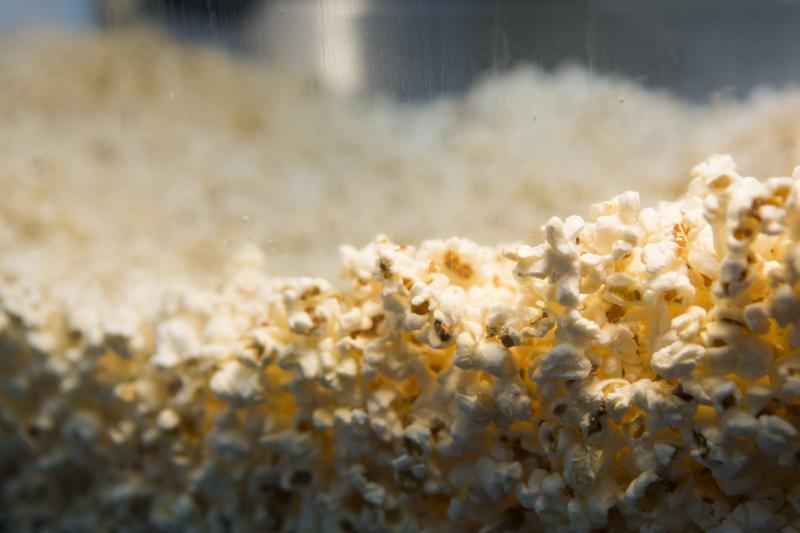 So far, people have been overwhelmingly positive about The New Parkways and its program choices, food and beer selection, according to Ceaser.

“Our staff probably gets the best reviews of people being engaged and friendly.” 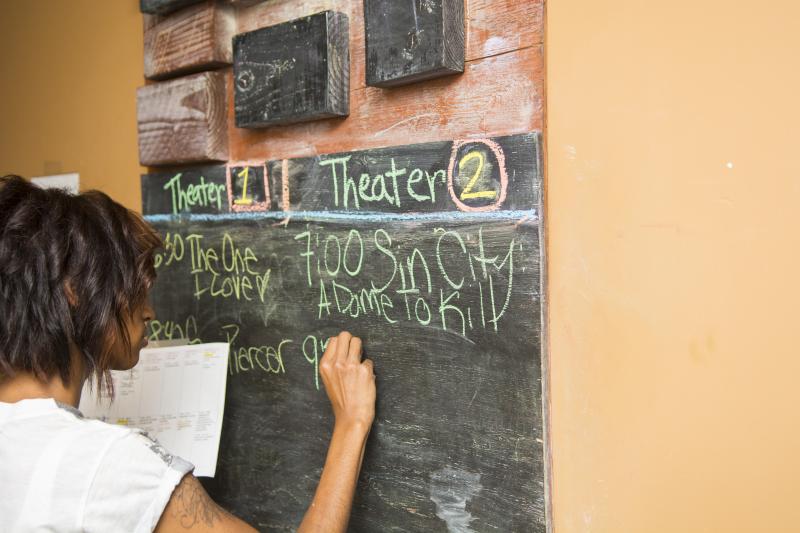 The New Parkway features popular theme nights, including the “Baby Brigade,” where parents can bring their youngins to see a movie without the fear of upsetting moviegoers, and “Thriville Theater,” showing classic drive-in movies.

“The Parkway had a great reputation of being accessible to everyone,” he said. “I want to make sure that is the spirit of the new theater.”

Walking Directions: Exit 19th Street BART via the 20th and Broadway exit. Head northwest on Broadway. Turn left onto 22nd Street, and turn right onto Valley Street. Turn left on 24th Street. The New Parkway Theatre will be on the right.

Note: Use caution when you visit the theater at night. The surrounding area is not well lit and away from the bustle of Uptown. Better yet, be safe and catch a taxi or ride share back to BART.

Andrea Curry works in BART's marketing department and is all about spreading the word of fun things to do near BART. Her earliest memory is riding BART with her father from Fremont to Oakland (to give mom some peace and quite), and it's always her ride of choice whenever she sees the A’s, rocks out at The Fox, or eats burritos stuffed with French fries (Google Taqueria Los Coyotes).