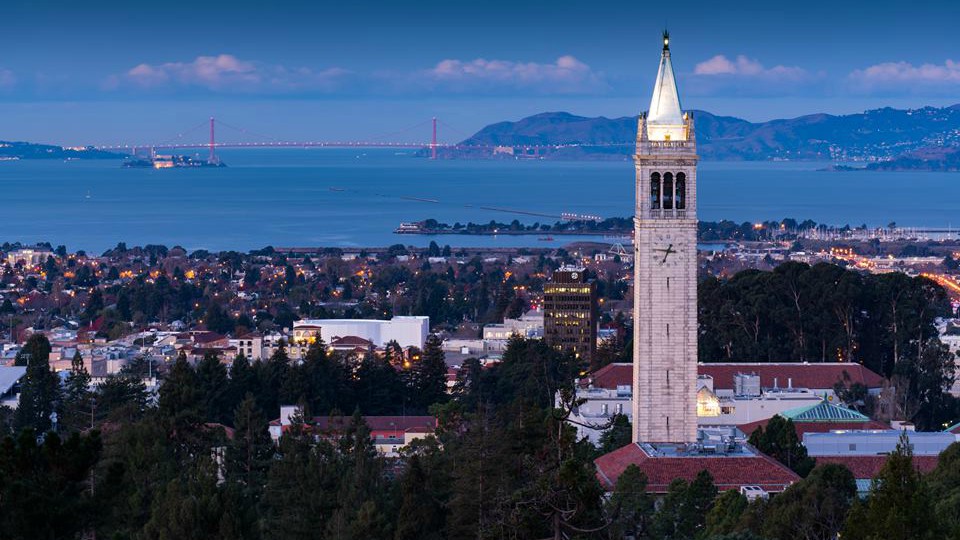 Climb secret staircases to sweeping bay views and then pass through the birthplace of California cuisine before rubbing elbows with U.C. Berkeley students, faculty and visitors on this BARTable walk from El Cerrito to downtown Berkeley.

After exiting the El Cerrito Plaza BART Station, jump onto the Ohlone Greenway and walk south (with the East Bay hills on your left and the bay on your right). This linear park with a paved pedestrian and bike path runs 5-plus miles, much along a former Santa Fe Railroad right-of-way, between Ohlone Park in Berkeley (MLK Jr. Way and Hearst Ave.) and Baxter Creek Gateway Park in Richmond at San Pablo Avenue. 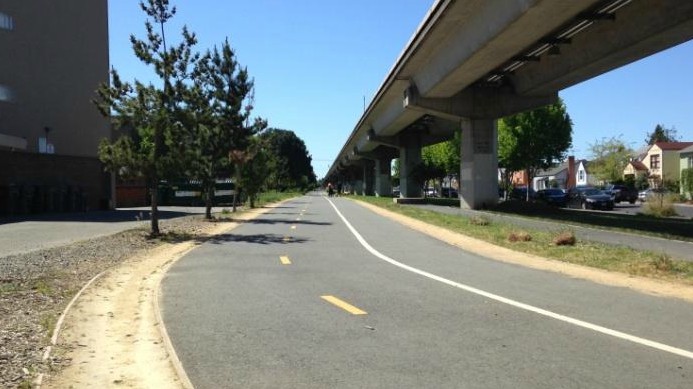 During the system’s early years, BART trains ran alongside Santa Fe freight trains through this stretch of the Ohlone Greenway.

Follow the path underneath the elevated BART tracks into Albany and then take a left on to Solano Avenue. Lined with shops, cafes and restaurants, the street was named after Solano County to the north. Many other neighborhood streets were also named after California counties (for example, Marin and Los Angeles avenues) as part of a campaign in 1908 to move the state capitol from Sacramento to Berkeley, which didn’t pan out. 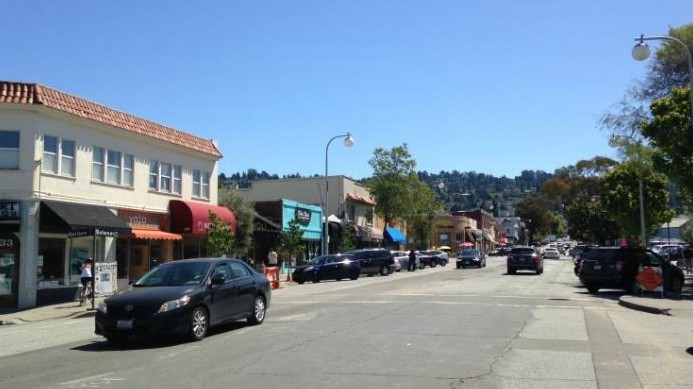 Solano Avenue runs two miles from the south end of Albany Hill to the Northbrae (aka Solano Avenue) Tunnel in North Berkeley.

Continue through the shopping and business districts into Berkeley. If you need an energy boost, grab some coffee or a bite along the way; a good idea as the path soon heads up into the hills. Near the end of the commercial section of the street is the Berkeley Oaks Theater. Built in 1925, it was designed by the Reid Brothers, who also did the Fairmont Hotel and Cliff House in San Francisco as well as the Grand Lake Theater over in Oakland. After a few management changes, the theater closed its doors in 2010 and has remained so, despite a few relaunch efforts. 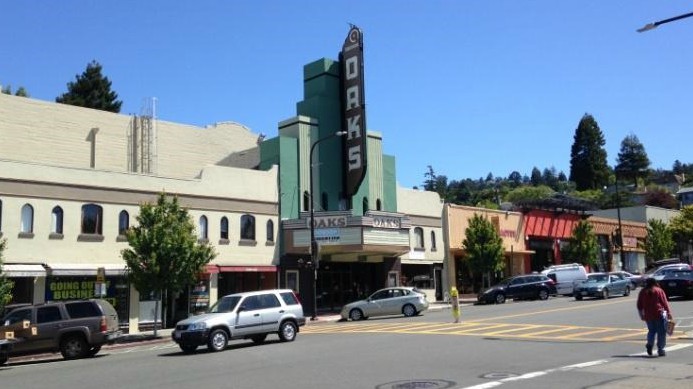 Originally built in a “modified Moorish” style, the Oaks Theater was later remodeled in the art deco style (1935).

At the intersection with The Alameda where Solano Avenue veers off to the right, pause and fix on the narrow alley to the left of the private driveway. Cross over and head up this series of neighborhood alleys and staircases that make up Indian Rock Path. Hundreds of these “secret” alleys, paths and stairs dot the East Bay hills from Oakland to El Cerrito. When housing rapidly expanded into the hills after the 1906 San Francisco earthquake, these pathways were built as shortcuts for residents to get to and from the streetcar lines of the Key System, one of the predecessor transit systems to BART. 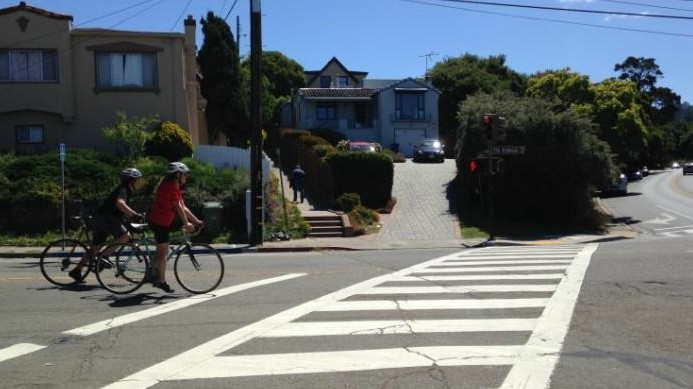 Many neighborhood shortcuts, like Indian Rock Path, are well-maintained and still well-traversed by locals and visitors alike.

After crossing Contra Costa, Mendocino and Arlington avenues, the path leads up to Indian Rock Park and its namesake rock outcropping, on which early rock climbing pioneers practiced and developed their techniques. Take the stairs to the left around the rock up to Indian Rock Avenue where the park extends across to some smaller outcroppings, a grass field and picnic area that make a good spot for a breather or lunch break. 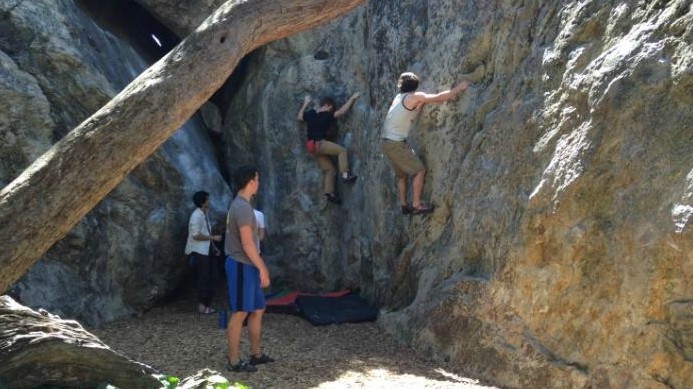 Bouldering enthusiasts (without ropes or harnesses) honing their skills while clinging to a face of Indian Rock.

For the sure-footed, ascend the steps carved right into Indian Rock during the Great Depression to the summit. Take in the jaw-dropping view, stretching from downtown Oakland across the bay to San Francisco and Marin County and back over to Richmond. (Local Tip: Pick up a bottle of wine and maybe some cheese on Solano Avenue and enjoy them along with the sunset at the park.)

On the rock itself, spot the remains of acorn-grinding pits, made over countless years by the local Huichin Ohlone tribe. For more examples, take a short detour to the north of the park, up Indian Rock Avenue to Mortar Rock Park. And further up the street off of Santa Barbara Road is Grotto Rock Park, with an even more commanding view of the bay. 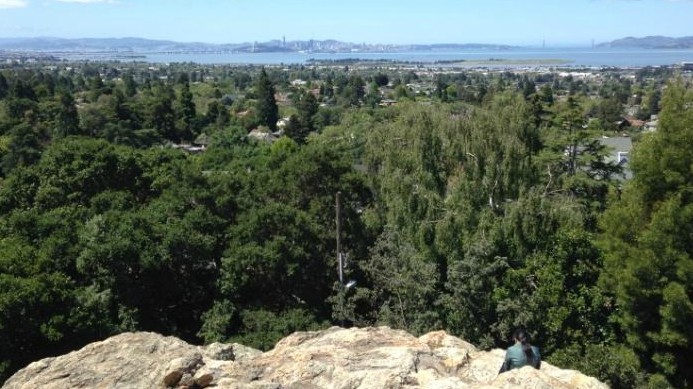 From the top of Indian Rock, three of the bay’s bridges can be seen: The Bay Bridge, Golden Gate Gridge and Richmond-San Rafael Bridge (if you crane your neck).

To resume the walk, return to the park. Face Indian Rock with the bay behind, turn left and go down Indian Rock Avenue. At the end of the park, take a left on to Shattuck Avenue. Continue for about a mile to the intersection with Rose Street, pass hillside homes with enviable bay views and then Live Oak Park, with its wide lawn framed with redwood, oak and bay laurel trees.

With a lawn perfect for picnicking or kite flying, Live Oak Park also has sport courts, an indoor theater and an art and garden center.

Cross over to the CVS Pharmacy ahead on the left and continue down this side of Shattuck Avenue into the famed “Gourmet Ghetto” district. If you’re a fan or even just appreciate farm-to-table practices, specialty coffee or cheese, fresh bread or chocolate truffles, give a nod here to the establishments that helped launch them in the U.S. back in the 1970s. Pass by Peet’s Coffee (original location on the corner of Walnut and Vine streets), The Cheeseboard Collective (other side of Shattuck Avenue) and the renowned Chez Panisse restaurant (1517 Shattuck Ave.).

The street median on Shattuck Avenue in front of The Cheeseboard Collective often serves as overflow picnic space on sunny days. 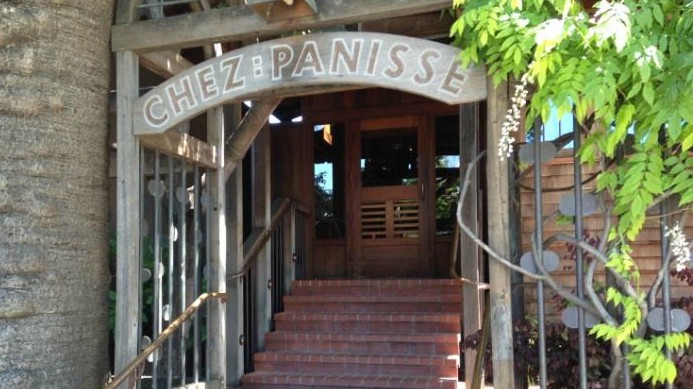 At the intersection with Virginia Street is Poulet, another anchor eatery that brought the “gourmet” to take-out nearly 40 years ago. Cross here over to the other (west) side of the street and continue down Shattuck Avenue. From here, the hustle and bustle steadily increases on this final stretch (0.5 mi) straight to the entrance of the Downtown Berkeley station. 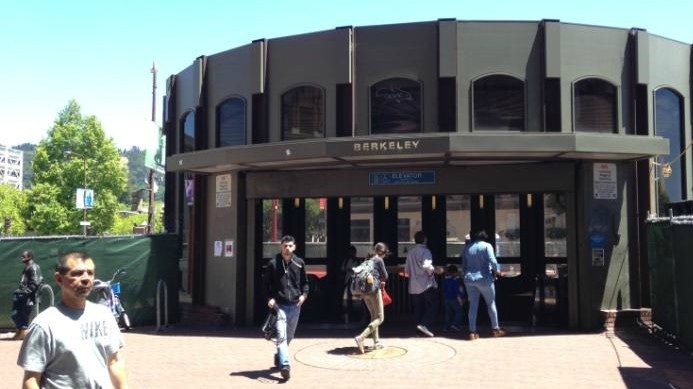 As part of a project underway, the main rotunda entrance to Downtown Berkeley station and surrounding plaza are being redeveloped.

Not ready to head home quite yet? Well, there’s no shortage of things to do here, even within only a block radius. There are shows at the Berkeley Repertory Theatre, live music at Freight & Salvage, art and film at the UC Berkeley Art Museum & Pacific Film Archive, and beer and pizza at Jupiter. Just be sure not to miss the last train out!

What to bring: Sturdy walking shoes and a daypack with water, bag lunch or snacks (or pick up along the way), sun protection (hat, sunscreen), extra layers or rain gear (just in case). A smartphone is handy for maps and looking up information, or taking photos. And, of course, your BART ticket or Clipper card.

El Cerrito Plaza Station first opened in January of 1973 and is named after El Cerrito Plaza shopping center, located “kitty corner” to the south. It is an elevated station (as is its twin, El Cerrito del Norte) with a concourse on the ground level and platform above with tracks for the Richmond, Warm Springs and Daly City/Millbrae lines.