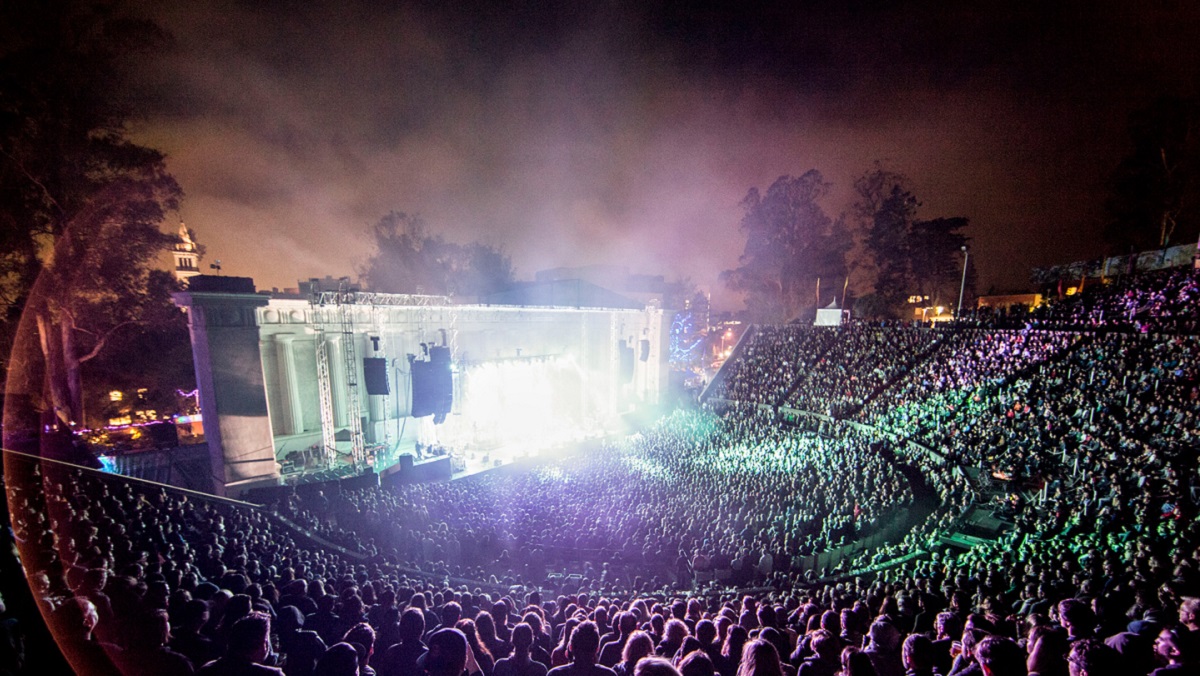 Photo courtesy of The Greek Theatre.
Every genre has a home in the Bay Area, which is a major stop for internationally touring acts—and BART helps make the process of witnessing a live show an easier part of your routine. No parking required. It’s one thing to don headphones on public transit zoning out to your latest favorite band; it’s a whole other thing to head out on a train to see that same band performing steps away from you.
Refined jazz, indie rock, world music, or dance pop? Foreign or local ensemble? When your BART trip lands at one of the following music destinations, turn off your music, take out those earbuds, and take in the live show. 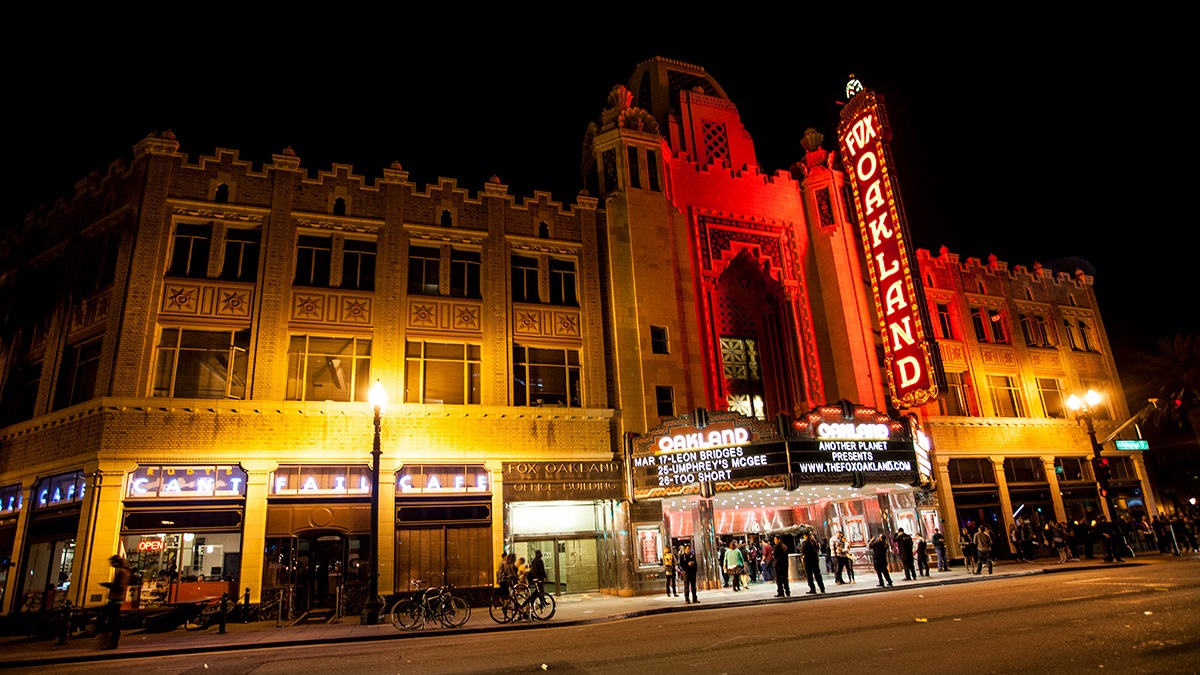 Photo courtesy of The Fox Theater.

This former movie theater is one of Oakland’s most favored concert destinations in the bustling Uptown neighborhood. The palatial venue was first built in 1928 on Telegraph Avenue, is a block from 19th St/Oakland, and houses 2,800 seats. With a classy setting and The Den serving as its in-house bar, The Fox is home to some of the biggest shows in the Bay Area.
Where: 1807 Telegraph Ave, Oakland
Nearest station: 19th St/Oakland
Walk time: Four minutes
Website: The Fox Theater 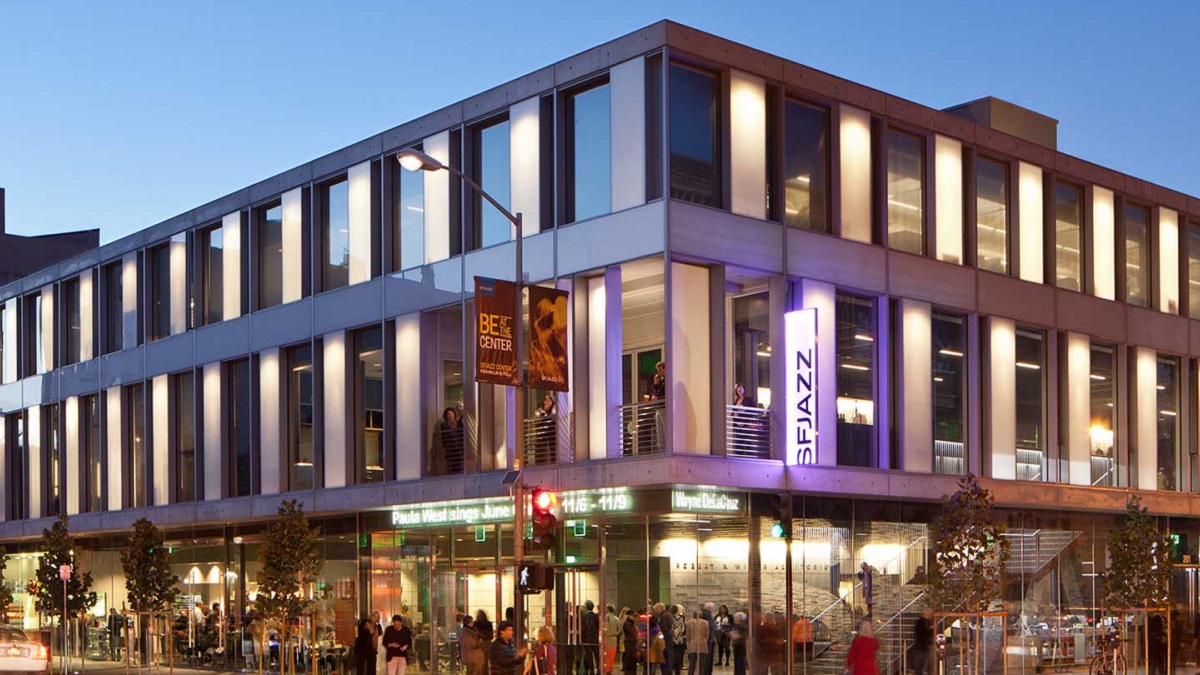 A short walk from Civic Center/UN Plaza station sits the polished, state-of-the-art SFJAZZ Center, which has been luring lovers of technically savvy beats to Hayes Valley in San Francisco since it opened in 2013. Enjoy the intimate shows of the 100-seat window-laden Joe Henderson Lab front venue, or get tickets for a big-name show in the expansive 700-seat Miner Auditorium. As the first stand-alone building in America dedicated solely to jazz, SFJAZZ has one of the most dedicated followings in the city.
Where: 201 Franklin Street, San Francisco
Nearest station: Civic Center/UN Plaza
Walk time: Eight minutes
Website: SFJAZZ 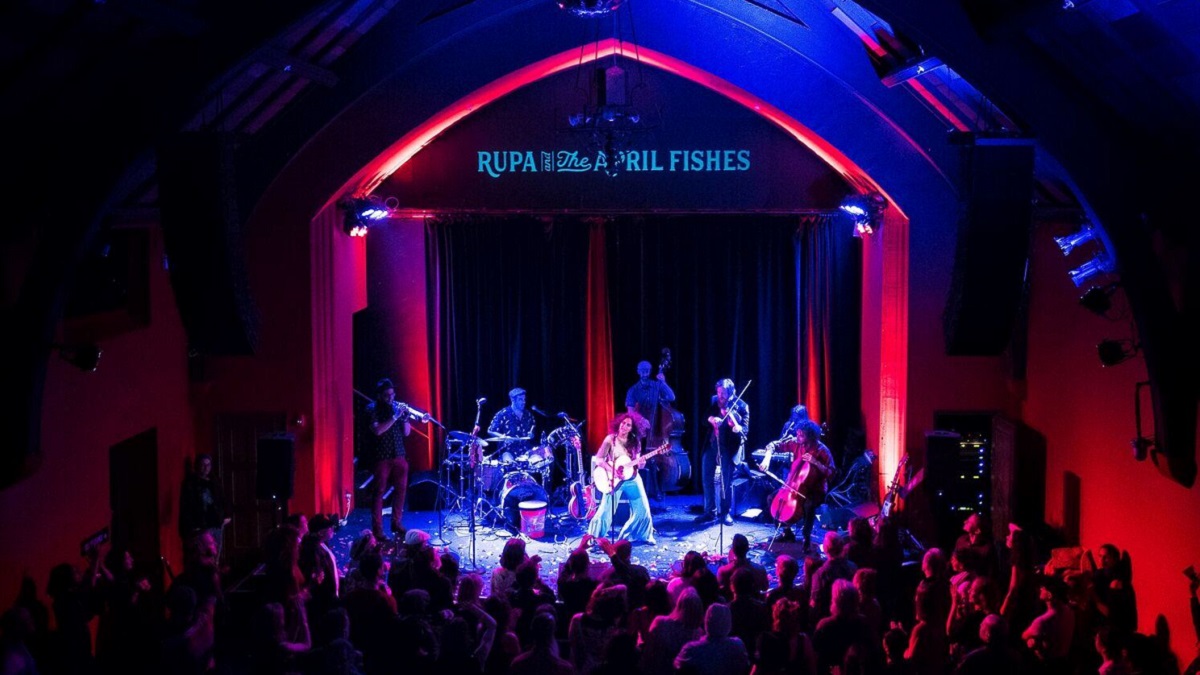 Photo courtesy of The Chapel.

Having become one of the Mission District’s favorite rock venues where Valencia and 19th Street meet, The Chapel and its adjoining Curio restaurant and bar(s) host big sounds and fine flavors. Hipsters and grownups find common ground at this mid-size venue that puts popular touring acts and local bands on stage for your firsthand viewing pleasure. Yes, the space was a funeral home back in the day, and whether or not you believe the rumors that it’s haunted, the memories of a satiating concert will likely follow you home at the end of the night.
Where: 777 Valencia Street, San Francisco
Nearest station: 16th St Mission
Walk time: Nine minutes
Website: The Chapel 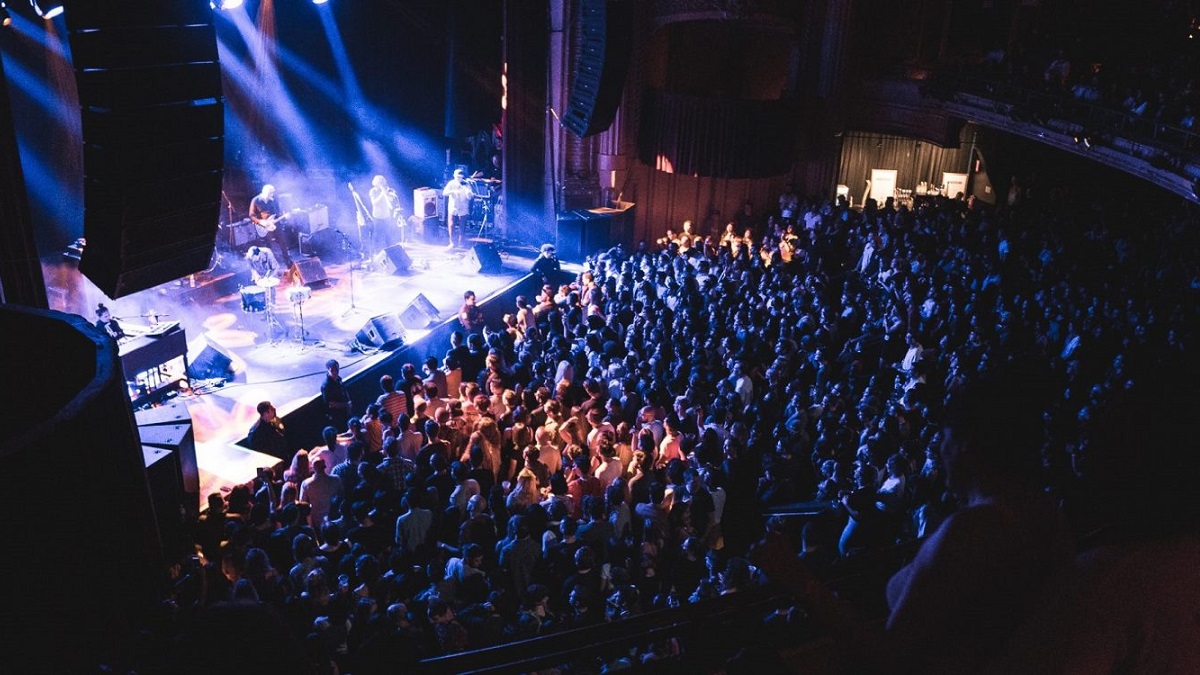 Photo courtesy of The Warfield.

A San Francisco institution since 1922, The Warfield can pack more than 2,000 people through its beloved doors, and it’s not uncommon for the Market Street venue to have sold-out shows on its coveted calendar. Take BART to Powell St and walk 1.5 blocks to hit up this elegant gold-and-red-laden theater for a world-class nightlife experience in San Francisco. When the red curtains part, take in a signature San Francisco experience.
Where: 982 Market Street, San Francisco
Nearest station: Powell St
Walk time: Four minutes
Website: The Warfield 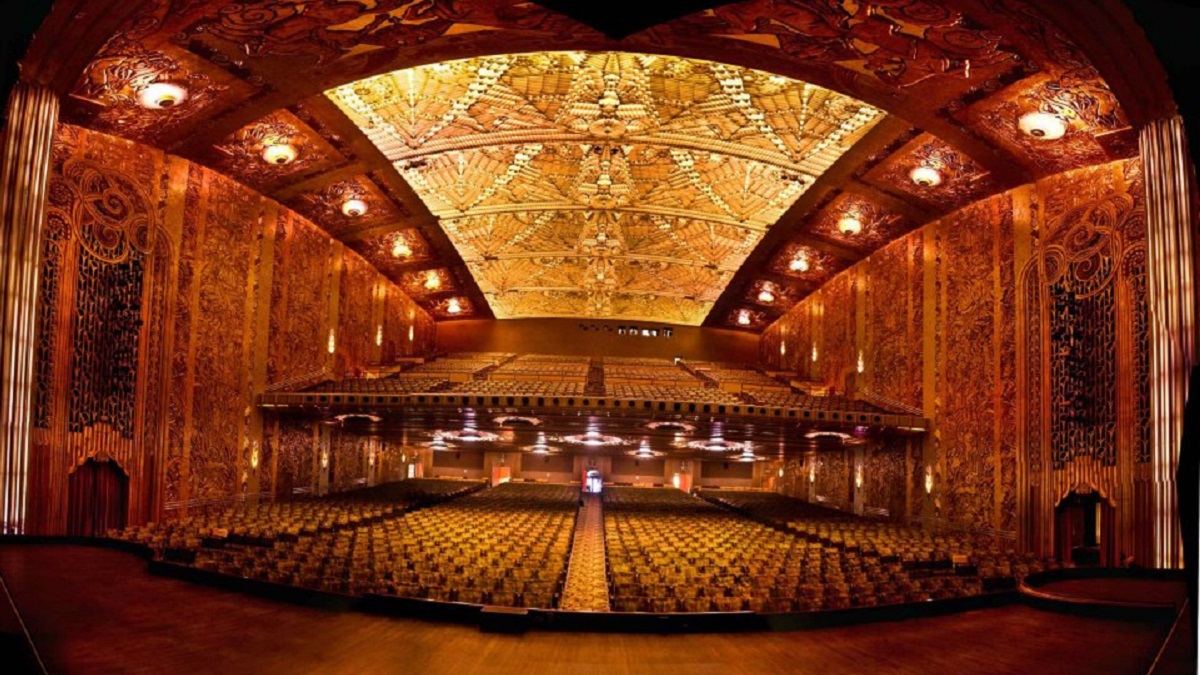 Photo courtesy of The Paramount Theatre.

The grand Paramount Theatre is where illustrious red curtains and gold-tinged Art Deco attract world-renowned acts to Broadway in Oakland, steps from 19th St/Oakland station. Lounge in a velvety seat or stand in front of the stage to scrutinize the visual details and stage banter of your favorite big name shows up close. Whether you’re catching the Oakland Symphony or a blues powerhouse, the Paramount pleases visitors with a supremely elegant atmosphere.
Where: 2025 Broadway, Oakland
Nearest station: 19th St/Oakland
Walk time: Two minutes
Website: The Paramount Theatre 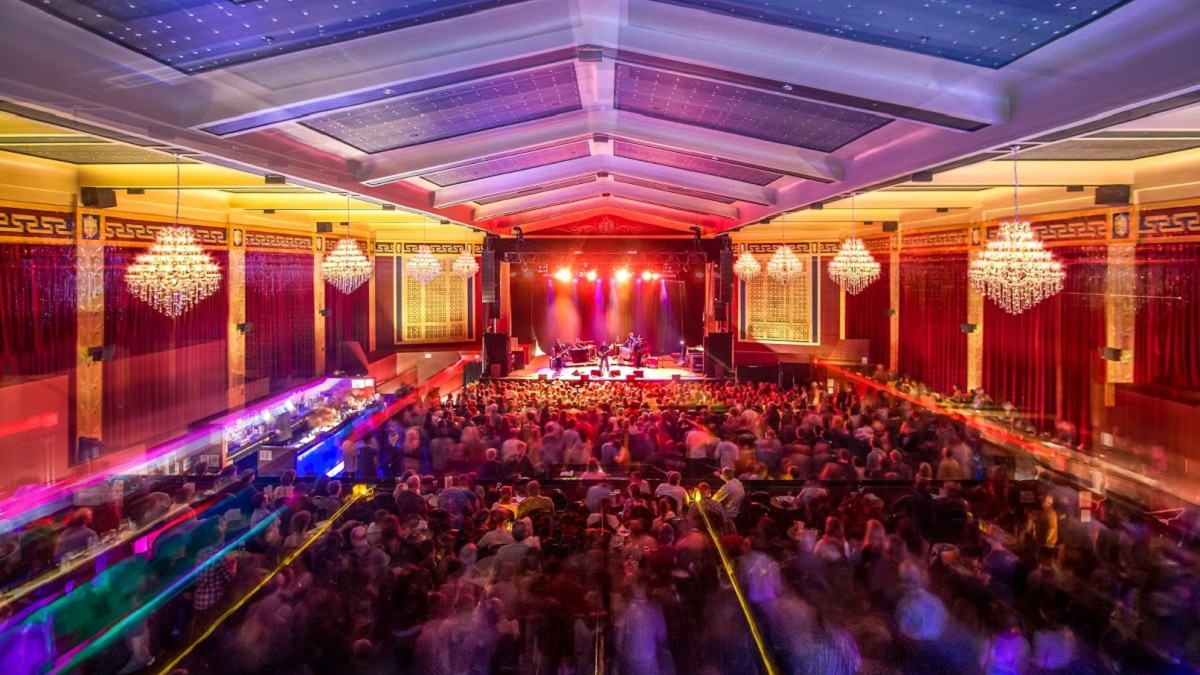 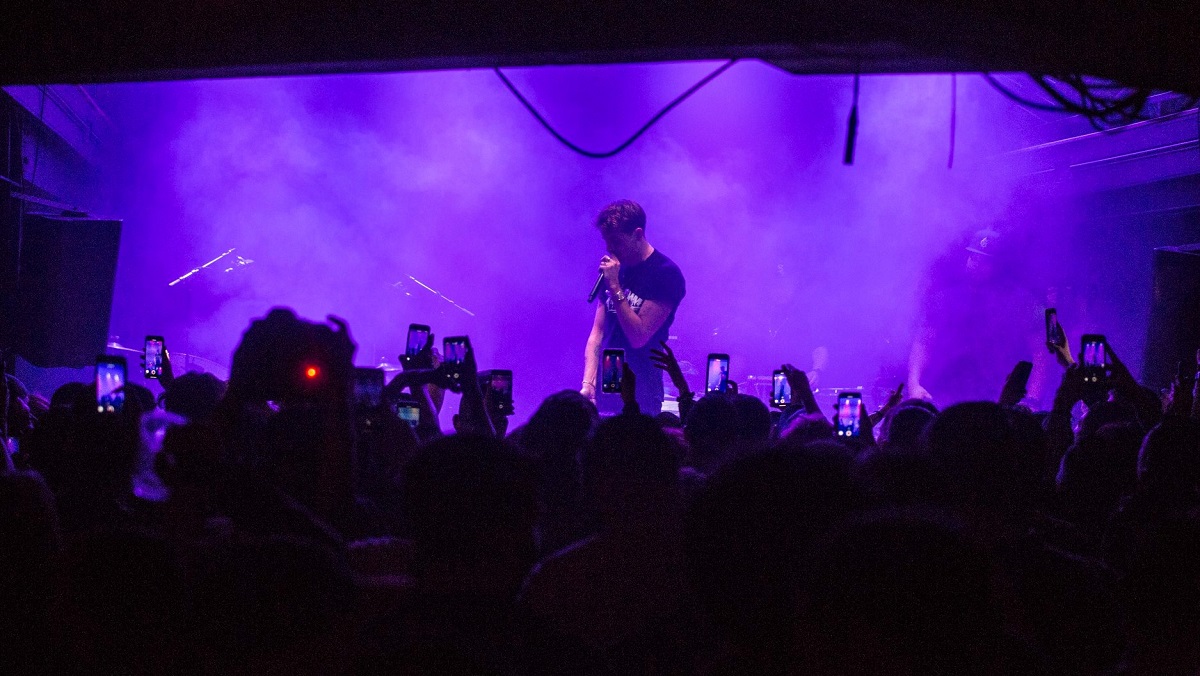 Photo courtesy of The New Parish.

When you’re feeling restless and need to let your limbs loose, The New Parish is a mid-size staple on Oakland’s San Pablo Avenue. Boasting an open space that welcomes dancing when the setlist suits the need, along with a balcony and an outdoor patio, its calendar of rotating styles makes regulars out of everyone from reggae buffs to rock aficionados.
Where: 1743 San Pablo Ave, Oakland
Nearest station: 12th St/Oakland City Center
Walk time: Six minutes
Website: The New Parish 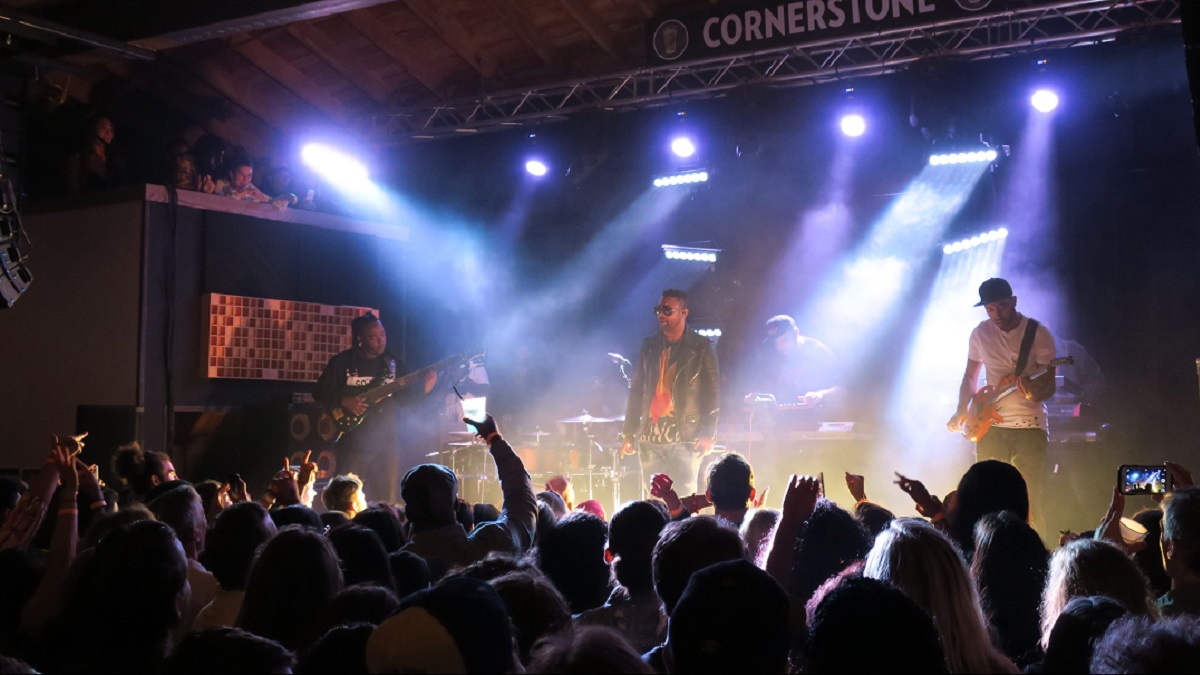 Located three blocks from Downtown Berkeley station, Cornerstone’s standing room venue is butted up against a full beer hall and restaurant with games; that means you can quickly go from enjoying live concert tunes to playing cornhole and ping pong while sipping craft beer. The music space is another casual spot that welcomes all ages to an open room with a mezzanine and limited seating.
Where: 2367 Shattuck Ave, Berkeley
Nearest station: Downtown Berkeley
Walk time: One minute
Website: Cornerstone Berkeley 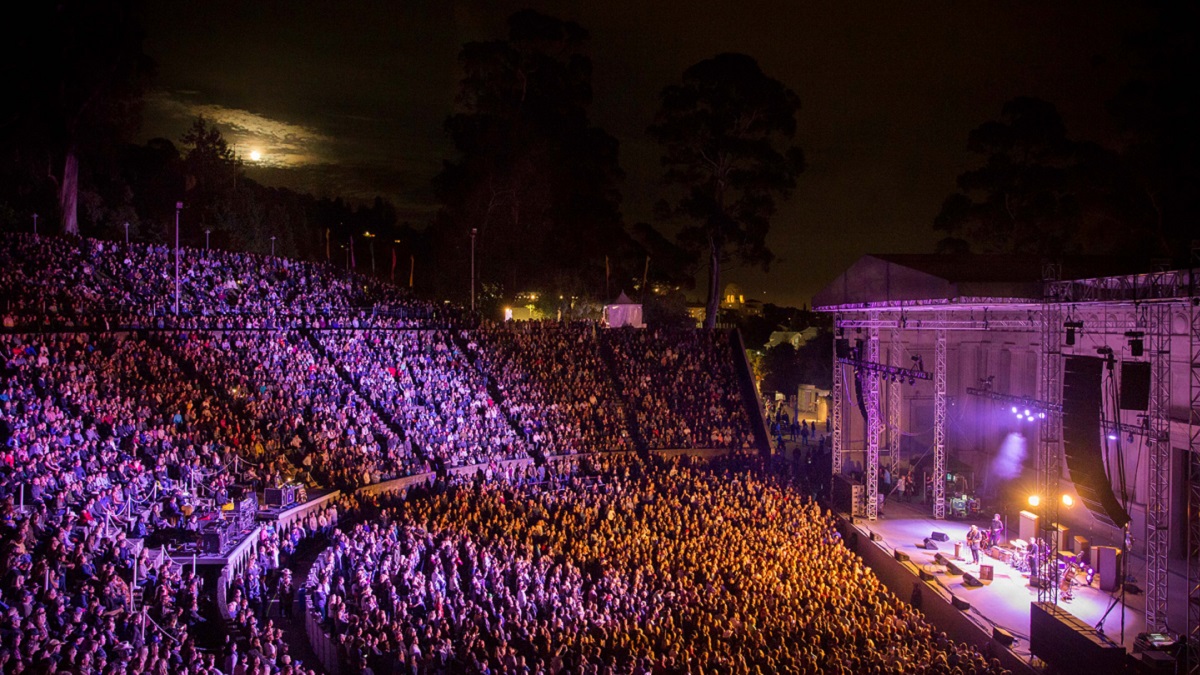 Photo courtesy of The Greek Theatre. 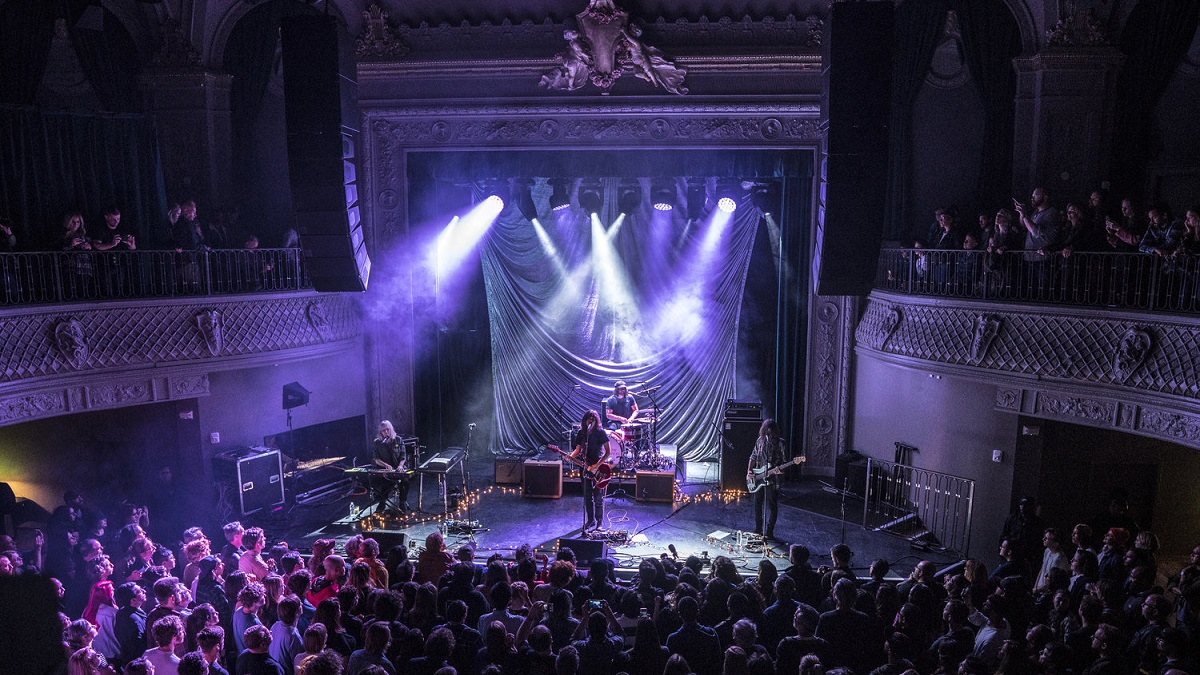 A recent addition to Downtown San Francisco, August Hall opened in 2018 as a large Union Square music venue with a downstairs bowling alley and Italian restaurant called Fifth Arrow. All the fun and games are located three blocks from Powell St, and the newer stage is set amidst high ceilings, stained glass windows, classy architecture, and a spacious main floor. The roster of touring talent that comes through includes names as big as the nearly 1,000-capacity venue.
Where: 720 Mason Street, San Francisco
Nearest station: Powell St
Walk time: Seven minutes
Website: August Hall
Let's get social.
Keep up with us on Facebook, Instagram and Twitter to see all of the best BARTable events, places to eat and have fun around the Bay. Have a favorite BARTable music destination? Let us know via social media, @SFBARTable #SFBARTable and your submission could be featured in our next article.