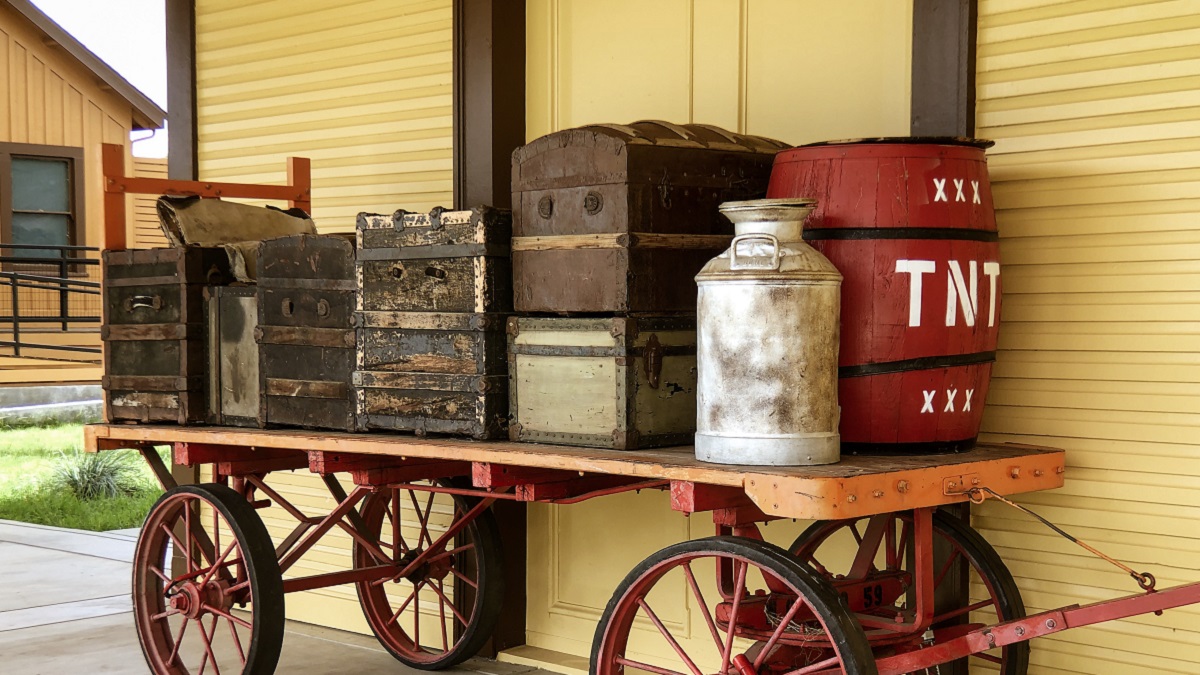 Learn about the important “roles” the East Bay played during the early days of the movie industry and in the building of the Transcontinental Railroad on this BARTable walk from Union City to Fremont through the historic Niles district.

Exit the Union City Station through the main entrance towards the parking lot. Take a left onto Station Way and follow it around to Union Square and then turn left and continue to Alvarado- Niles Road. If you need to pick up provisions or grab a bite first, take a short detour to the right to the Union Square Marketplace with a Safeway, Starbucks and several eateries (add 15 minutes, ½ mile round-trip).

Otherwise, cross over to the other side of Alvarado-Niles Road. Head left down to Osprey Drive, take a right and then a left onto Quarry Lakes Drive to Quarry Lakes Regional Recreation Area. Go past the entrance kiosk through the parking lot to Horseshoe Lake and take the Old Creek Trail to the right.

This regional park owes its name to the quarries established here in the mid-1800s. Gravel from Alameda Creek that runs along its southern edge was used in the construction of the western section of the Transcontinental Railroad, which came through nearby Niles Canyon. After quarrying operations ended, water from the creek was diverted to the lakes to recharge the Niles Cone Ground Water Basin that provides close to half of the water used by Fremont, Newark and Union City. 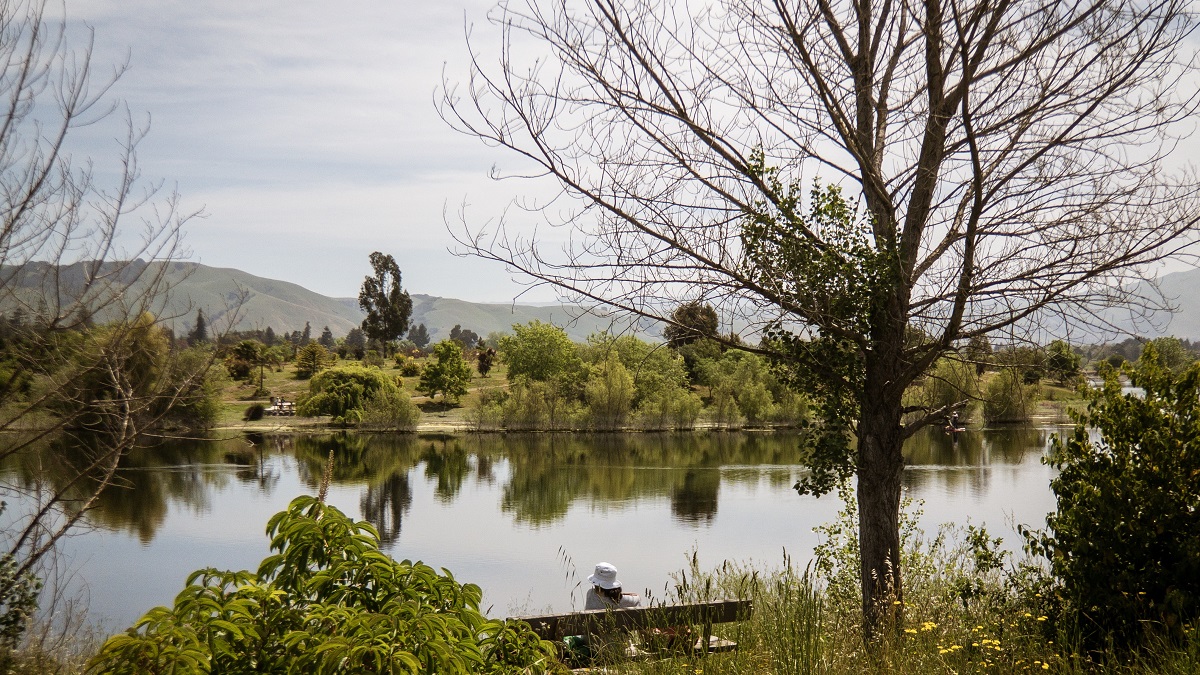 Covering 471 acres, Quarry Lakes opened in 2001 and provides facilities and access to boating, fishing, swimming, picnicking, hiking and plenty of wildlife viewing.
Continue on the Old Creek Trail, keeping Horseshoe Lake on your left, all the way around until it ends at the BART tracks. Take a right onto the Western Pacific Trail up to its end at Alameda Creek. The creek starts at a lake near Mount Hamilton (east of San Jose) and flows for 45 miles through Niles Canyon and out to the bay at the southern end of Hayward. It was the original boundary between Contra Costa and Santa Clara Counties before there was an Alameda County, which was established in 1853 from land taken from both counties. 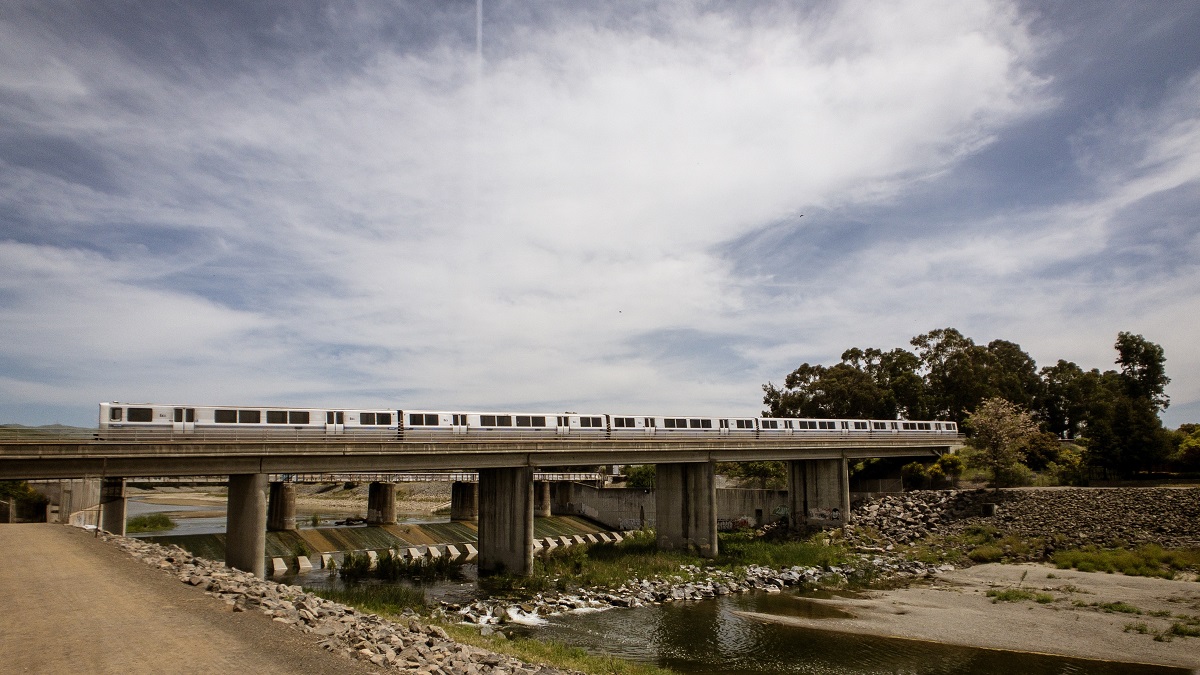 Steelhead trout, coho and Chinook salmon once ran through Alameda Creek before the construction of dams and other water projects.
Take a left onto the Alameda Creek Regional Trail that spans 12 miles, beginning in the Niles district of Fremont and continuing west through Union City and Newark to the Bay. Go under the BART tracks and take an immediate left onto the spur trail leading past Shinn Pond (where gravel was quarried in the late 1800s to build UC Berkeley) to Rancho Arroyo Park. Take a right onto Montecito Drive and another right onto Bodily Avenue, then a left onto Hillview Drive out to Niles Blvd. Turn left and walk a block down to Nursery Avenue.
For a historical and horticultural treat, head in for a visit to the California Nursery Historical Park. The 20-acre park is what remains of the California Nursery Company that once covered 463 acres (roughly the same size as Quarry Lakes!). The nursery was established here in 1884 by John Rock who moved to California after fighting for the Union during the Civil War. It was the largest operation of its kind west of the Rockies and provided the plants for Leland Stanford’s estate in Palo Alto. And for the 1915 Panama-Pacific International Exposition in San Francisco, it supplied the palms for the Avenue of Palms, which were transported there-and- back by horse, train and ship (pre-bay bridges era). (Park, Every day, 7am to 30 min past sunset; Museum, Sunday, 1 to 4pm; Self-guided walking tour map) 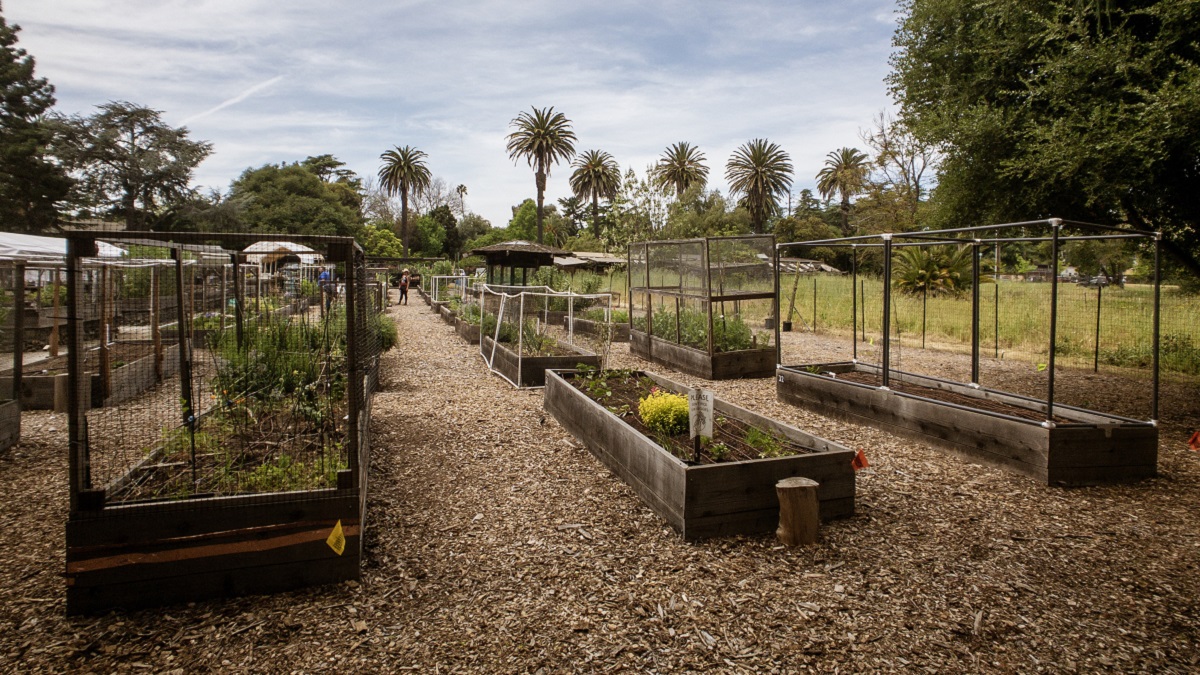 LEAF (Local Ecology & Agriculture Fremont) runs a community garden within the California Nursery Historical Park where local residents can rent planters to grow plants and vegetables.
Also within the park grounds is the Vallejo Adobe built in 1842 on, at that time, José de Jesús Vallejo’s Rancho Arroyo de la Alameda. Vallejo came from a prominent family during the Spanish and Mexican periods with large land holdings and military positions. He was a bit of a job hopper, holding down gigs as administrator and postmaster of Mission San José, military commander of the Pueblo of San José and flour mill owner. The adobe with tile roof structure was initially used to house workers from his mill located at the mouth of Niles Canyon. 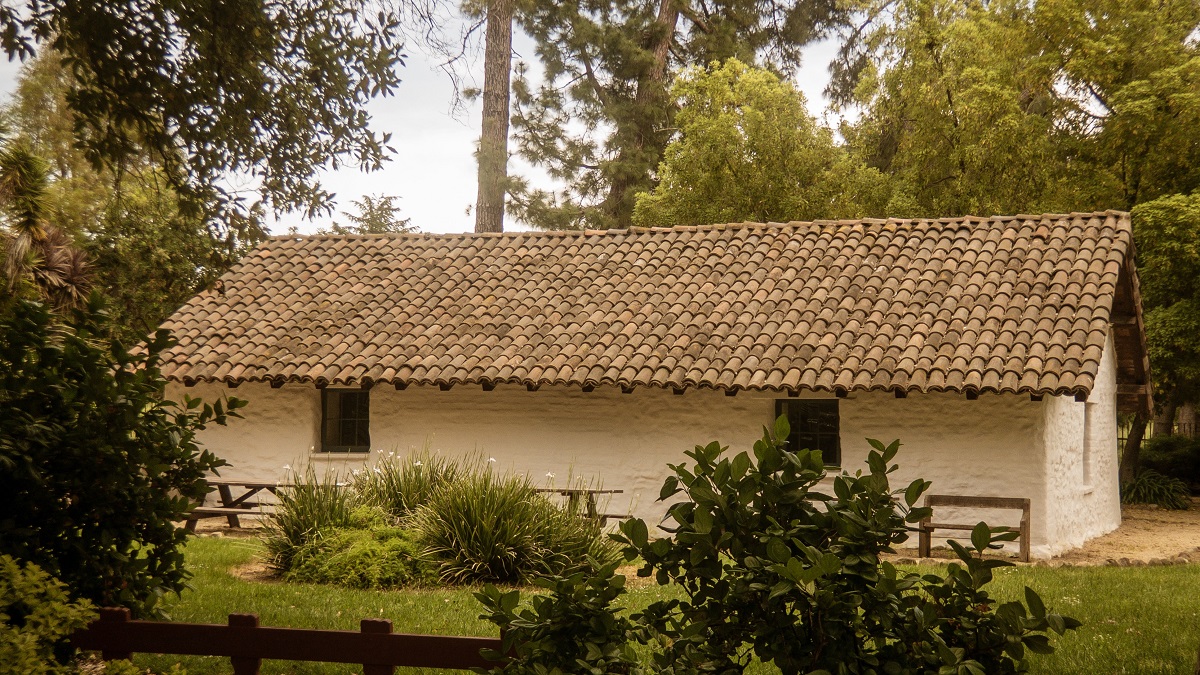 The Vallejo Adobe was renovated in 1930 by Bay Area architect Frederick Reimers and is now used for special events.
Return to Niles Blvd., head back to the right past Hillview Drive and continue on into downtown Niles. With its quaint shops, country store and town plaza lined up along its main street, Niles is a wonderful East Bay gem that has kept its “Small Town, USA” feel despite the surrounding urban growth. It was one of five small towns (the others being Centerville, Irvington, Mission San José and Warm Springs) that were annexed into the City of Fremont when it incorporated in 1956. As you make your way through town, it’s impossible to miss its connection to the railroad. Union Pacific tracks crisscross its borders and in the plaza are railroad buildings, a caboose and train tracks with signals. In fact, it took its name from the Central Pacific Railroad's Niles depot built in 1870 as part of the Transcontinental Railroad.
Make your way further into downtown along Niles Blvd. Pop into Devout Coffee to top off your travel mug with pour-over coffee brewed from their roasted beans (weekdays, 7am to 6pm; weekends, 8am to 7pm). Then admire the lineup of motorcycles that inevitably forms next door outside The Florence Bar every weekend (every day, 10am to 2am). After that, head into the Niles Essanay Silent Film Museum to learn about the area’s contribution to the movie industry as a mini-Hollywood of the north. Chicago-based Essanay Film Manufacturing Company set up a studio and film lot just a half-block away in 1912. Niles and the canyon were used as the backdrop in many of their films, including those starring the “first western movie star” Gilbert “Broncho Billy" Anderson and also silent film legend Charlie Chaplin’s The Tramp that debuted his iconic tramp character. (Museum, Weekends, noon to 4pm, free; Theater hours vary by screening) 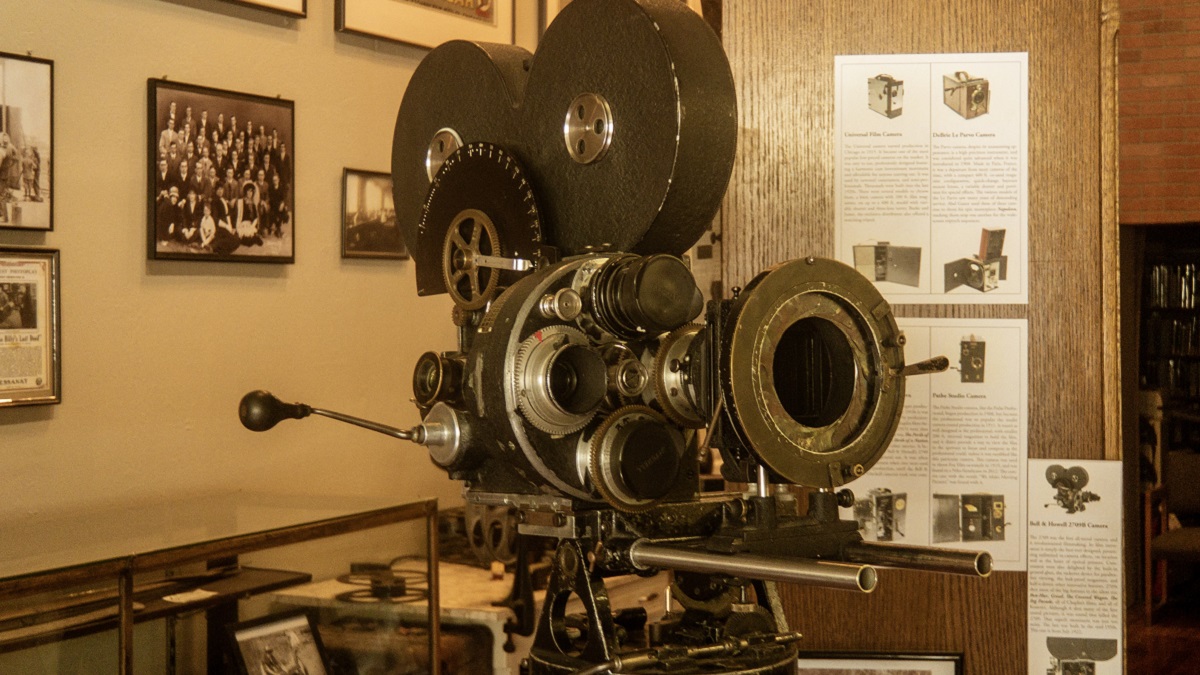 The Niles Essanay Silent Film Museum is located within the Edison Theater built in 1913 where movies of the early film era are screened every week.
Cross the street over to the Niles Town Plaza and take a break with the locals and visitors. At the back of the plaza is the second Niles Depot built by the Southern Pacific Railroad in 1901 with redwood from the Santa Cruz mountains. The depot closed in 1974 and when Southern Pacific announced it would demolish the building in 1981, a grassroots movement formed to save and move it to a nearby location on Mission Blvd. where it underwent restoration.
Interestingly, almost 30 years later in 2009, the depot was moved back to its original location with the development of the plaza, although it was rotated 180 degrees so that its colonnade façade would face downtown. Today, the building houses the Niles Depot Museum, which focuses on the early railroads of the Tri-City Area (Fremont, Newark and Union City). (Sunday, 10am to 4pm) 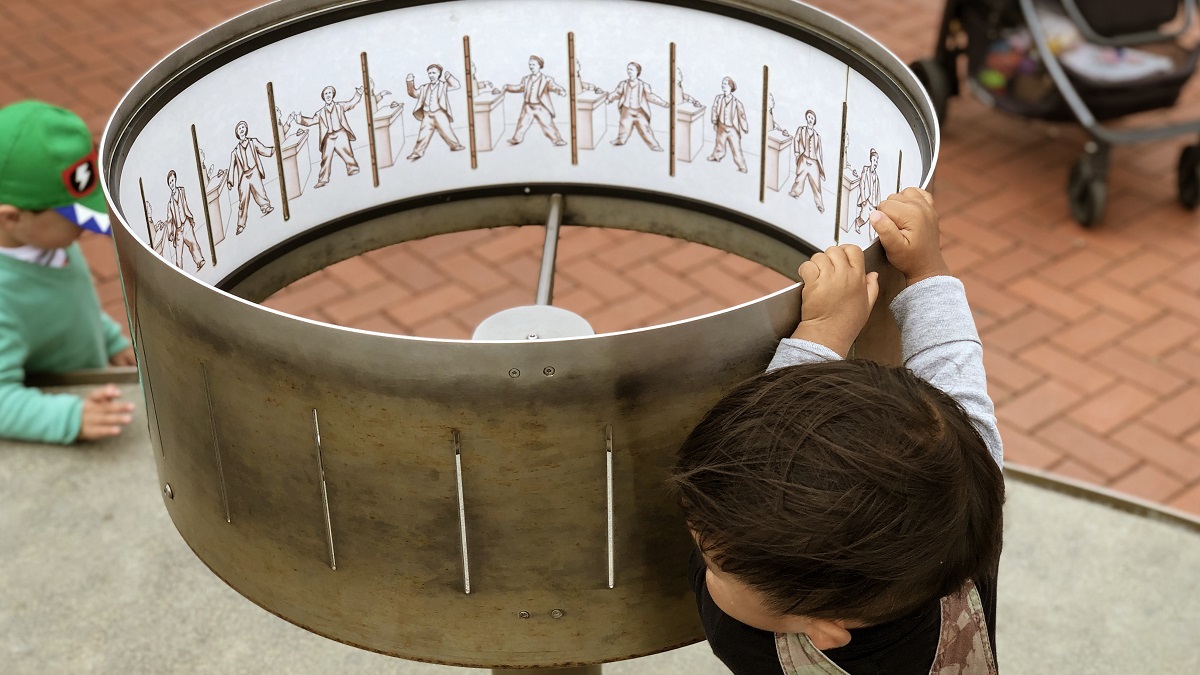 A fun feature in the Niles Town Plaza for kids and grown-ups alike is the zoetropes, cylindrical devices with sequential images on the inside surface. When spun, they produce an illusion of motion, a moving picture, when viewed through the slits on the outside.
If treasure-hunting is your thing, then Niles is the place for you. Dotted all along the main street are antique shops, each with ornately decorated window displays to lure you in. You can easily spend an entire afternoon peering through curio cabinets of heirloom jewelry, combing through the racks and stacks of vintage clothing and vinyl records or searching for that one objet d'art to adorn your mantel. 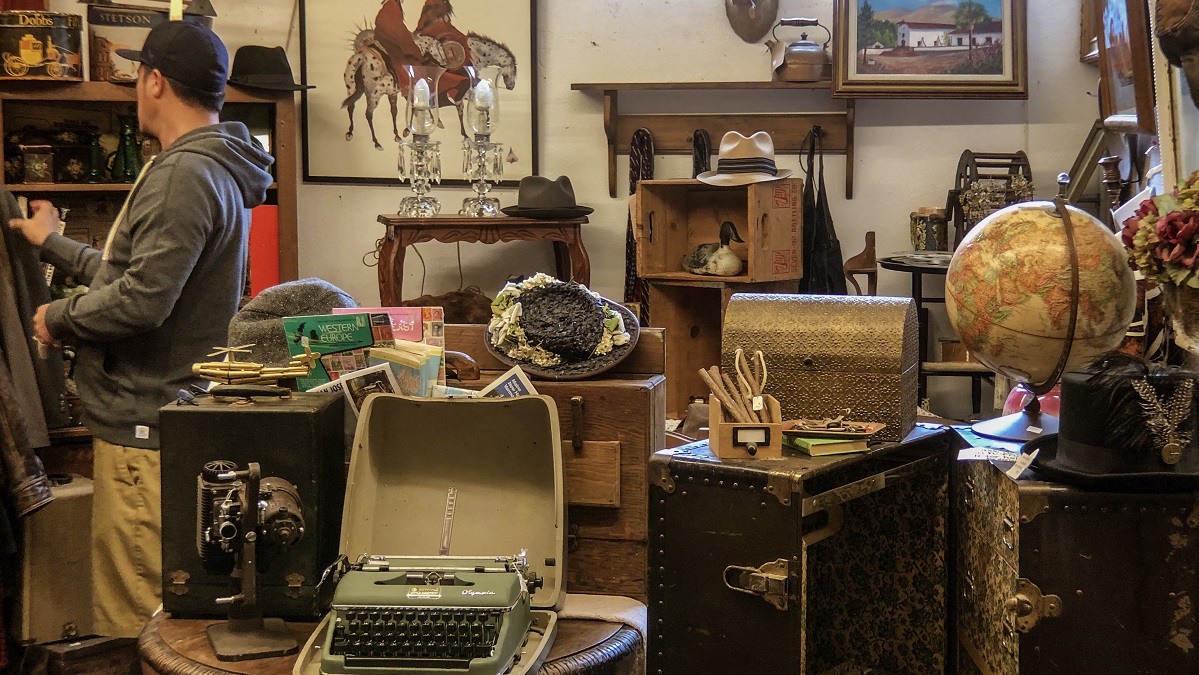 With close to 20 antique shops, you’re bound to find some dazzling bauble, piece of Americana, vintage coat or collectible toy to commemorate your walk through Niles.
If you’ve worked up an appetite, belly up to the counter at Bronco Billy’s Pizza Palace and order a slice of their thick and chewy crust pizza loaded with toppings – enough to even satisfy their namesake movie cowboy. The Bull Durham with salami, pepperoni and sausages is highly recommended for meat lovers and vegetarians will no doubt enjoy all the mushrooms, olives and bell peppers on the Sagebrush. (Sunday to Thursday, 11am to 10pm; Friday & Saturday, 11am to 11pm) 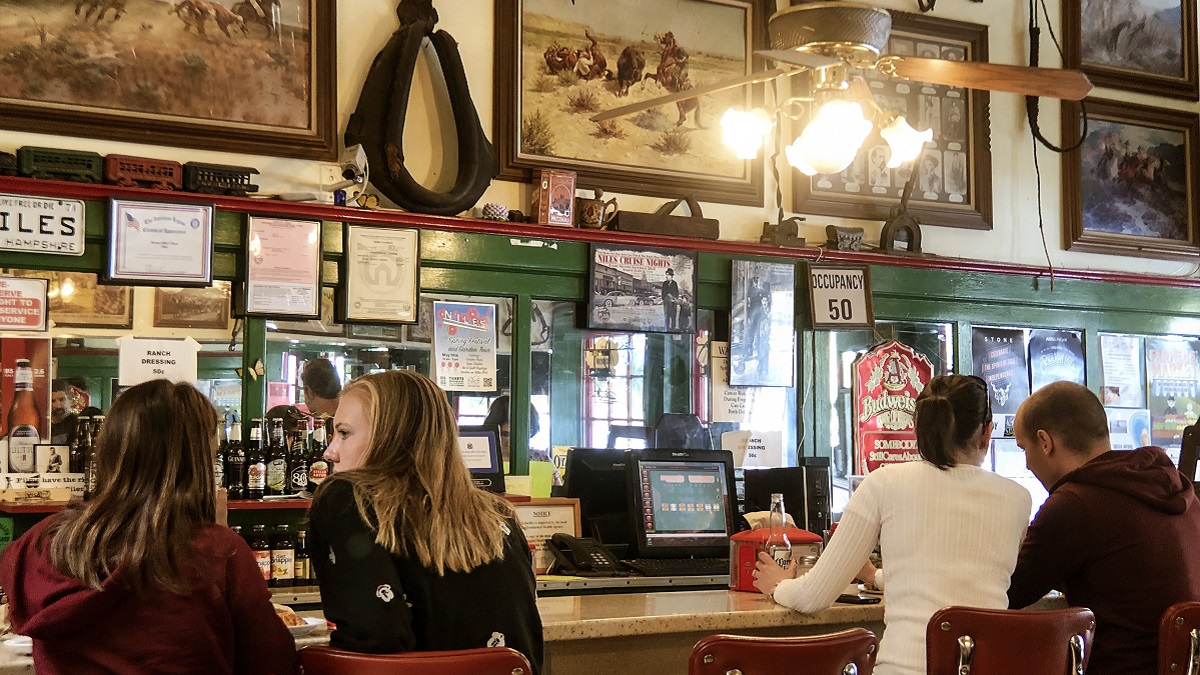 While waiting for your pie to come out hot from the oven, take in all the memorabilia hanging on the walls of Bronco Billy’s Pizza Palace.
And don’t forget something sweet. Head a few doors down to Niles Ice Cream Sweets & Eats for a heaping scoop churned by the Treat Ice Cream Company of San Jose. On top of classic flavors, the shop carries some interesting combos, such as banana nut and tin roof sundae, and also tropical flavors, like mango and trendy ube (purple yam). (Every day, 11am to 10pm)
Alas, it’s time to bid farewell to Niles. Continue along Niles Blvd., under the railroad tracks (look back up at the Niles entrance sign) and take a right onto Mission Blvd. Cross over Alameda Creek and take a right onto Walnut Avenue. Keep straight for about one mile to the Fremont Station on the right just past the Tule Ponds at Tyson Lagoon.

What to bring: Sturdy walking shoes and a daypack with water, bag lunch or snacks (or pick up along the way), sun protection (hat, sunscreen), extra layers or rain gear (just in case). A smartphone is handy for maps and looking up info or taking photos. And, of course, your Clipper Card!

Union City Station first opened in September 1972 and was built on the site of the Western Pacific Railroad’s Decoto depot. It is situated at the center of Union City’s developing Intermodal Station District, a transit-oriented community with shopping, employers, housing and public amenities. A new east entrance will lead to a future commuter platform for the Amtrak Capitol Corridor and planned Dumbarton Rail Corridor services.
Fremont Station first opened in September 1972. It was the terminal station for lines to Daly City and Richmond until the opening of the Warm Springs / South Fremont Station in 2017. Outside the west entrance are two covered bench areas decorated with glass tile mosaics by artist Joe Keivitt and a clock and temperature tower dedicated to George Silliman (1916 – 1997), President of BART’s Board of Directors when operations first began in 1972.