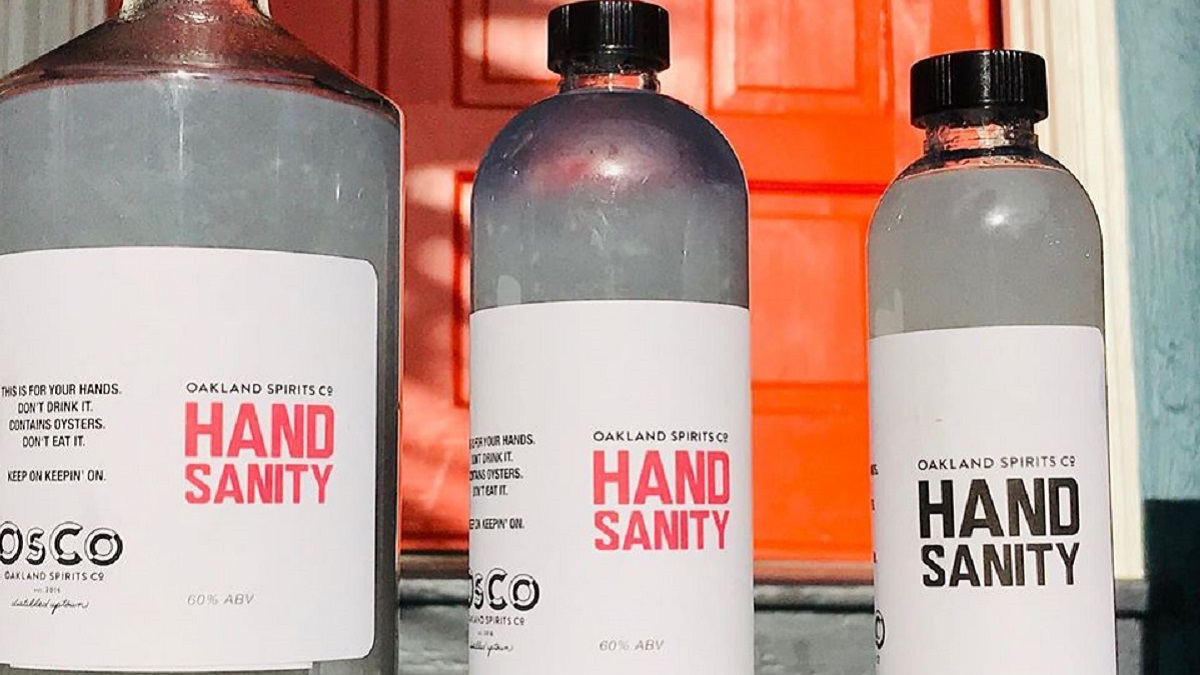 19th St. Oakland
Photo courtesy of Oakland Spirits Company.
While drinking can be a lighthearted matter, cleanliness in this time of COVID-19 is certainly not: We’re all seeing sanitizers emptied from market shelves as a result of the novel coronavirus. Luckily, an Oakland distillery spontaneously switched up its beverage operations to accommodate serious concerns—turning alcohol into hand sanitizer.
“We’re super small and I started doing it to distract myself from my business tanking during the first few weeks of March,” Mike Pierce, owner of Oakland Spirits Company (OSC), tells BARTable of his spontaneous project making an effective sanitizer solution this past month.
OSC, located in Uptown Oakland a short walk from 19th St/Oakland BART Station, is best known for its oak barrel-aged gin, brandy, bourbon, and amaro. Pierce also helms Two Mile Wine, next door to OSC.
The local business owner started using OSC’s residual distilling byproduct, called “tails,” as the base ingredient for a new hand sanitizer he dubbed Hand Sanity. It’s also made with xanthan gum to thicken it, vegetable glycerin, and aloe. Per CDC regulations, the mix is now denatured by adding 2-3% bleach to make it undrinkable.
Sure, it’s a departure from the distillery’s usual operations, but it’s a change some in the industry are making with support from regulators. The Acting Administrator of the Alcohol and Tobacco Tax and Trade Bureau (TTB) uncharacteristically relaxed regulations on distillers so that they can now pump out liquid sanitizers that adhere to World Health Organization (WHO) guidelines.

Despite the very worrisome economic times in the service industry, Pierce decided not to turn a profit from Hand Sanity, which is in high demand. Instead, he allocates the special OSC remedy for frontline healthcare workers. Pierce and co. have donated bottles of Hand Sanity to the Oakland Fire Department, Oakland Police Department, Highland Hospital ER, and Operation Dignity (a nonprofit serving unsheltered community in Oakland).

We were already scaling our ‘Hand Sanity’ Hand-sanatizer this Monday when Melinda Drayton from @oaklandfirefighters got in touch asking if we could help fill a supply gap with their 500 badass firefighters and paramedics. It took us a couple days to get it right (all that really matters is it’s 63% ABV, who cares if it’s runny) but we were able to pass off a bunch Wednesday and then resupply them yesterday. We were also able to make little personal bottles for the East Bay unsheltered community (pic #4). Thanks @libbyschaaf ‘s office for the connect and @operationdignity for all you do. This slow moving but rapidly escalating crisis has changed everything. But at least we’re all in it together and we all feel like we’re on the same team. Finally. Stay strong, vigilant, and take care of each other.

“All of us in the hospitality and beverage industry are very creative, used to working on a team, and used to solving problems on the fly, and so this was an easy pivot for us,” he says of the impromptu move.
“It’s been a nice distraction and it’s nice to be able to use our business to help people in a healthy way. And as a business owner, doing stuff for the right reason at the right time is like goodwill capital. Though it’s not something you actively seek out, it happens organically during a crisis.”

And it’s earning OSC brand allegiance. Locals are now making their own home versions of sanitizer by purchasing OSC’s Glasshouse 153 Proof Brandy online at Bounty Hunter. The brandy is well above the alcohol threshold needed for effective sanitizer and has seen a spike in demand since COVID-19. The at-home DIY process: Mix OSC Glasshouse 153 Proof Brandy (76.5 ounces) with aloe gel (16.5 ounces) and orange bitters (2 ounces).

Huge props to @saulranella the genius behind the bar-program at the venerable @hogislandoysterco and our collaborator on our AUTOMATIC Halfshell Oyster Gin. Thanks for using our glasshouse 153-proof brandy and for sharing this vital knowledge. Full circle, we just passed off 9 Liters of our homemade OsCo ‘Hand Sanity’ hand sanitizer to the @oaklandfirefighters to distribute amongst their 500 badass firefighters and paramedics. #Repost @saulranella ・・・ New meaning to a hand crafted cocktail! #besafe #staystrong @briefcase_full_of_booze

To support Oakland Spirits Company, the public can purchase the OSC line of spirits or bottles of Two Mile Wine: Pierce is manning delivery service throughout the East Bay, SF, and Marin. Email OSC for details and put in an order at mike@oaklandspirits.com.