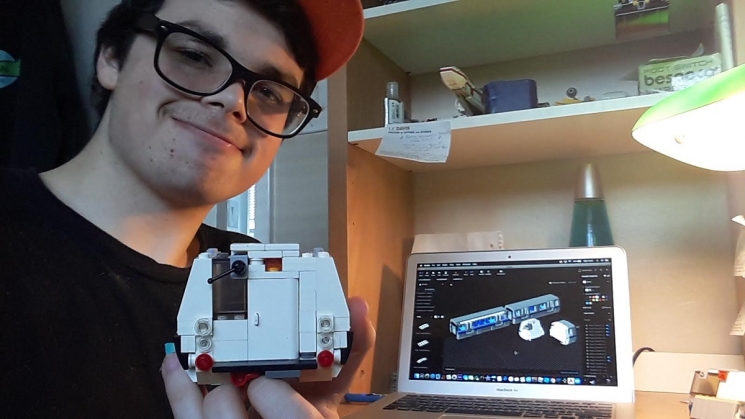 Sergio Aldana poses with one of the BART train prototypes. Photo courtesy of Sergio Aldana.
Sergio Aldana’s earliest memories taking BART were as a 5-year-old living in Hercules. “It was fun going on the subway for the first time, and going underwater was the most notable thing because it was so different,” he recalls of those childhood adventures taking public transit to visit Oakland and San Francisco.
That same year, his grandfather gifted him his very first LEGO set—the #6260 Shipwreck Island model. As a kid who didn’t have video games, building things soon became his source of fun.
Today Aldana is a 19-year-old living in Richmond who rides BART from El Cerrito del Norte Station to Pleasant Hill, where he’s a sophomore at Diablo Valley College taking product design classes. And he’s combined two longtime interests into one passion project: In 2019 he designed the BART 50th Anniversary Train Set for the LEGO Ideas online platform, naming it in anticipation of BART’s upcoming 2022 birthday.
If Aldana’s BART train design garners enough public support through its LEGO Ideas page, the famous toy company may consider putting it in 3D form to add it to its celebrated product line.

A post shared by LEGO BART Train and more (@legobarttrain) on

In early high school, Aldana put aside his physical LEGOs and eventually picked up design software to play around with computer creations. That discovery led him full-circle back to the building toys when, while riding BART to Oakland last year, Aldana’s 9-year-old brother spontaneously suggested he make a digital rendering of the BART train as a LEGO set.
“My brother’s motivation for the idea rubbed off on me and I sort of went for it 100 miles an hour to design it.”
He started drawing his initial version of the BART legacy fleet. “The first two weeks I was sketching on paper to figure out how the heck I was going to build it into LEGO form,” he recalls.
Soon he moved his thoughts from paper to computer screen with the help of BrickLink’s LEGO-designing software. “The very first prototype was pretty bad,” he laughs. “Then after developing it more, on and off for another two to three months, it looked pretty good.”
To replicate the BART train exteriors as accurately as possible, Aldana referenced photos online and YouTube videos posted by local train enthusiasts. “The interior wasn’t hard to come up with just from how I remember riding it,” he says.
In December he added BART’s Fleet of the Future to the set, and Aldana’s creativity has resulted in an instructional design that requires 2,817 LEGO pieces to build the entire project.
His favorite thing about the set? “Once you build the train, it’s modular and meant to be changeable and not static,” he explains. “You can switch out the cabs—pull out a C-car cab and put in an A-car cab—so it’s meant to be playable.”
Check out the Car Types page to learn more about the different cars and cabs in the BART fleet.

A post shared by LEGO BART Train and more (@legobarttrain) on

Aldana has a year to get 5,000 supporters in order to move to the next level of the LEGO Ideas campaign; with a deadline of July 2021, he’s collected nearly 1,500 votes gathered through his idea page online. His LEGO Bart Train Instagram page has a following made up of avid LEGO collectors, train enthusiasts, BART riders, and Bay Area locals keeping tabs on the progress.

Whether or not the design goes from computer screen to store shelves, he says he hopes the LEGO project will get people rethinking their modes of transit. “Hopefully this project will encourage anyone to try out BART and public transportation in general,” he says. “It’s about trying to take a step out of your comfort zone, because public transportation can get you anywhere.”
After putting so much work into the BART 50th Anniversary Train Set, Aldana’s personal BART experience has changed. It’s become a different ride for the young creator who now can’t help but fact-check his design during trips. “Now I look around and see if I got the details right.”
To learn more, visit the BART 50th Anniversary Train Set LEGO Ideas page, where you can support Aldana’s project by clicking on the blue support button. 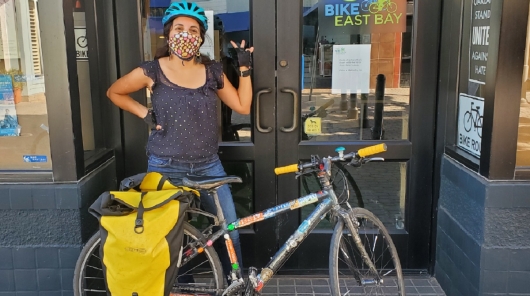 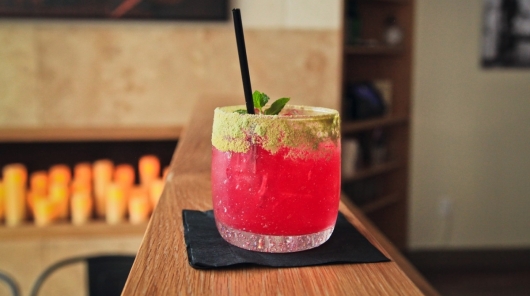