“Art in Oakland is different than art in other places,” Moss Kardener told BARTable. “Oakland has always had a political voice as a community and in the artwork, and we support a lot of emerging artists."

Kardener is vice president of the Oakland Art Murmur (OAM) Board of Directors, and the small but far-reaching organization behind the Oakland First Friday Art Walk has been promoting the local art scene for more than a decade.

The debut First Friday Art Walk (aka The Art Murmur) took its inaugural steps in Uptown Oakland in January of 2006; it was the brainchild of a group of neighborhood galleries hoping to create a buzz and lure an audience. That simple monthly first Friday event blossomed to attract people from all over the East Bay and San Francisco.

“We had a couple food trucks because people were coming after work and needed nourishment for their appetites in addition to their soul,” Kardener remembered. “It soon became a large event.” 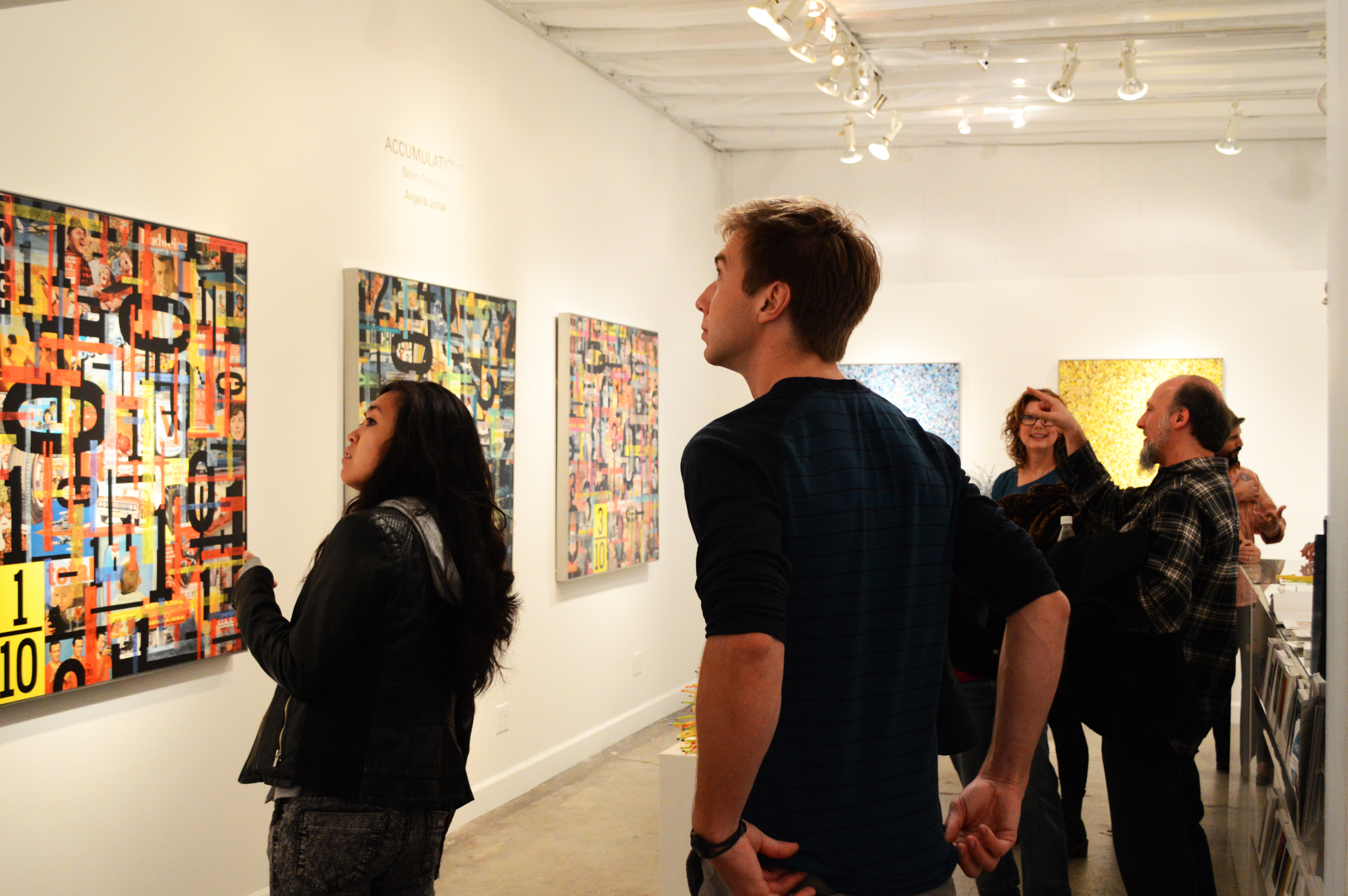 Now entering its 13th year, OAM has connected over 1,000,000 visitors with Oakland art exhibits, and the street festival component of First Friday has since become independent from OAM. The organization became a 501(c)3 non-profit in 2014 and currently promotes more than 50 art spaces spanning the city. From dedicated galleries to cafes and businesses consistent in showcasing visual art, these quasi-public locales open their doors for all to explore without an entrance fee.

Organized events include the aforementioned First Friday Art Walk of open galleries from 6-9pm, the Saturday Stroll self-guided gallery tours, Guided Tours every third Saturday, and mural tours; all of which are reachable by BART. The full curated list of official OAM sites can be viewed in its latest Visual Arts Venues Guide.

“Oakland has established galleries successful in the corporate world as well as with private collectors, so you see the whole spectrum here,” Kardener said. “This reflects the city as being a mix of cultures and ideas and as a progressive community.”

The entire OAM nonprofit operation is currently run by seven volunteer board members and a part-time social media/marketing person; its mission is further buoyed by partnerships with local community-based organizations and donations (you can donate through the OAM website).

With National Geographic having just named Oakland in its 2019 list of Best Trips, change is inevitable. Like the ebb and flow of creative juices themselves, galleries are affected by both the enlivening pulse and real estate pressures of Oakland’s growing popularity. 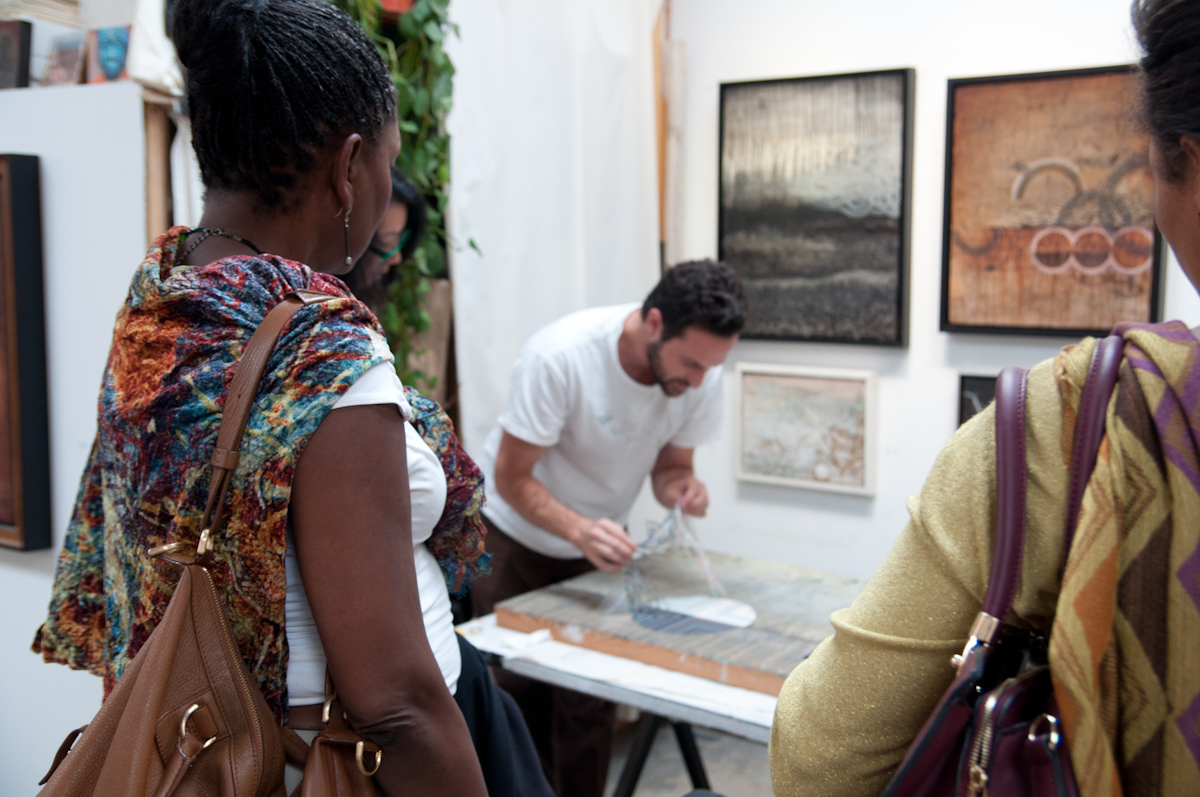 After more than eight years of operation, Uptown’s Vessel Gallery, a celebrated OAM venue, recently closed when its landlord wouldn't renew its lease. On the other end of the spectrum, Mise en Place Gallery has opened as a new addition to the neighborhood. Other spaces persisting in Uptown, steps from 19th St/Oakland BART station, include Chandra Cerrito Contemporary gallery and Creative Growth Art Center, which promotes artists with developmental, mental and physical disabilities (some of whom have found acclaim in SFMOMA and beyond).

Although OAM First Friday Art Walk originated as the brainchild of a small group of galleries that sprung up around 23rd Street, Kardener emphasized that Uptown is not where OAM is meant to be centered and that its focus permeates beyond. “We’re aware of each neighborhood in Oakland having worthy art and we want to acknowledge the art community throughout all of the city.”

You can now find galleries in Downtown, Jack London Square, Fruitvale and Jingletown neighborhoods, in addition to the Uptown area people may be most familiar with. “Ten years ago, you wouldn’t see people wandering around Downtown and now there’s all kind of activities and galleries open,” he said.

While local galleries inherently benefit from OAM events and promotion, Kardener said it’s a misnomer that OAM is a defacto gallery association. Rather, he maintained, the organization is programming made by the people and for the people.

“Our focus will always be the public at large first ... OAM is a hub around visual arts in Oakland by creating community with the public, the creative community and the venues that showcase their work.”

What’s next for Oakland Art Murmur with the arrival of 2019? The nonprofit just launched a new Oakland Originals artist profile series online, updated its self-guided tours, and the board has upcoming strategy sessions to deepen its current programs and expand the footprint even further.

“There are people who don’t necessarily see eye to eye but can open up a dialogue over a shared experience of art,” Kardener explained one reason behind the dedication of OAM’s volunteers. “Art can address concepts we just can’t do in other ways.”

Oakland Art Murmur is a 501(c)3 non-profit that aims to aggregate information, and be a resource for the public and the broader arts community concerning Oakland’s visual arts. For more information, to donate, or to become a member, visit OaklandArtMurmur.org.