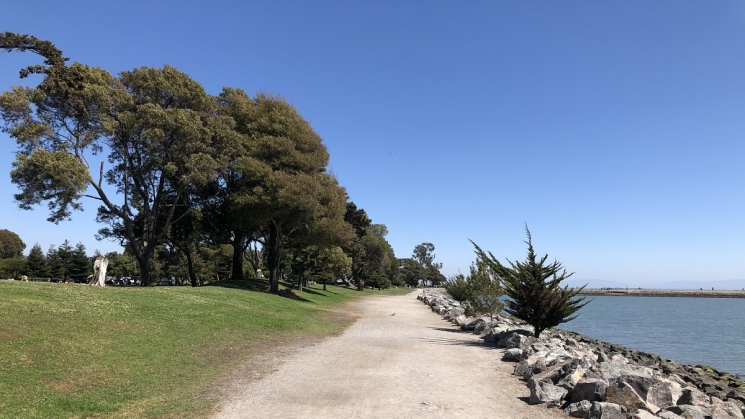 Marina Park in San Leandro is a beautiful spot to have a picnic and relax. Photo courtesy of BARTable staff.

In addition to last week's 6 places in the East Bay to take advantage of Transit Month deals, this week we're giving you six more places you can make the most of BART's plus AC Transit's discounts this month. BART is offering 50% off fares on Clipper, and AC Transit is providing Fare-Free Fridays. When combined, East Bay riders can save a lot of money when taking public transit this month!

Editor's Note: Please wear a mask while riding BART. Before you travel, use our Trip Planner to get estimated arrival and departure times. Learn what to expect when you return to BART here. 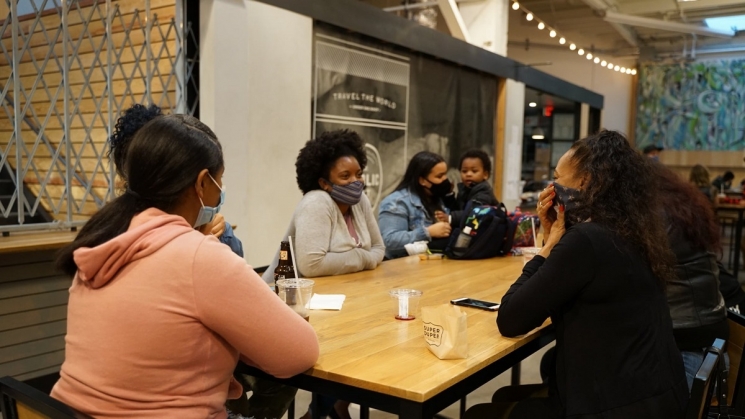 Emeryville's Public Market has been around since the 80s, but several years ago the market had a major renovation and upgrade. The market includes a number of retail shops, housing, and even a barber shop, but it’s best known for the trendy fast-casual dining hall. Currently 16 eateries are open, including sustainable Mexican spot C Casa, fried chicken purveyor Minnie Bell’s Soul Movement and vegan ice cream shop Mr. Dewie’s Cashew Creamery. 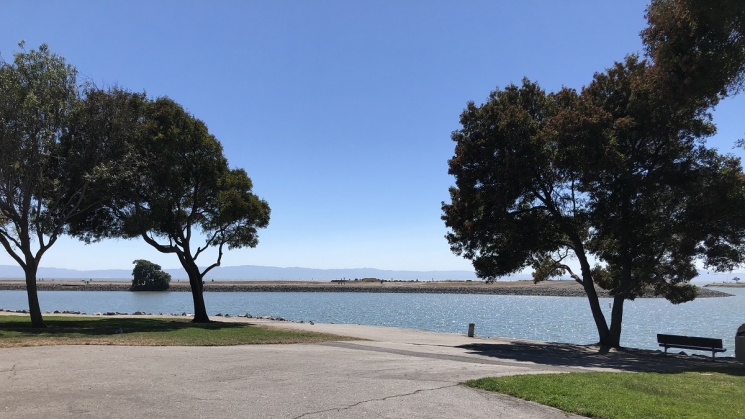 Head to the San Leandro Marina for two yacht clubs, three Marina restaurants, a waterfront hotel, park and picnic areas, and the Shoreline Trail. Marina Park is something the whole family can enjoy. The very center of the park features a long stretch of grass usually occupied by soccer players and picnickers, and there are barbeque areas on its perimeter where local families gather on weekends. It can be the perfect place to view a sunset (don’t forget to bring a windbreaker!). For a workout, the peninsula is lined with small exercise stations. If you’re just there for the views, look to the left and find a stretch of the original landscape of the Bay Area — wetlands and mudflats that provide a home to native birds. 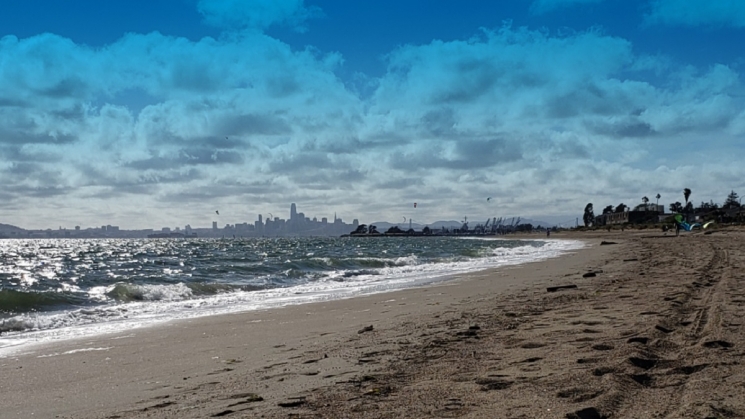 This well-maintained sandy beach runs for several miles along Alameda’s bayfront. If you’re a birder, the southernmost portion is a wildlife sanctuary with good shorebird viewing. If you want to have some fun with the family on the water, you can rent a windsurfer, kite board or stand-up paddleboard. And at high tide, Crab Cove is quite pleasant for swimming on a hot day; the water is warmer than most beaches around the Bay.

The site of the old naval base in the westernmost edge of Alameda was once a symbol of industrial decay; now it’s a place for booze and revelry. Spirits Alley currently is home to several breweries and distilleries who’ve inhabited the massive warehouses and hangars left behind and remodeled into serving some of the best-known alcohol in the Bay Area. Despite being as close to the geographic center of the San Francisco Bay as land can get, there is tons of outdoor space to roam around and drink in the many tasting rooms and beer gardens. Plus, on a nice day, you get some of the best and closest views of San Francisco the East Bay can offer. 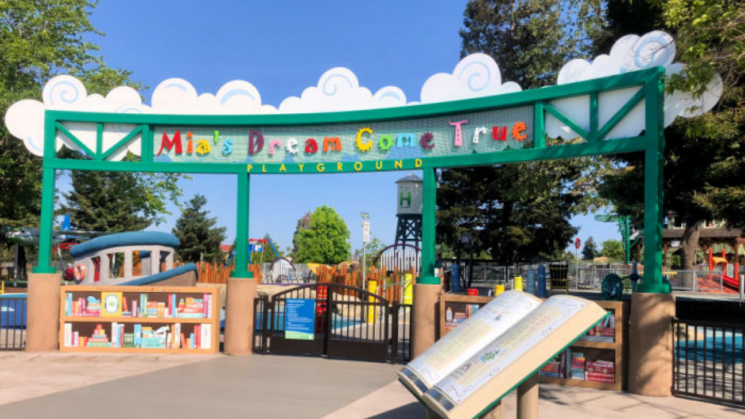 A family-friendly urban oasis in the middle of a residential neighborhood in south Hayward, Mia’s Dream Come True: All Abilities Playground in Tennyson Park welcomes all with a unique design that is part Disneyland and part Alice in Wonderland. The all-accessible playground is adorned with a fire truck donated by the Hayward Fire Department, a mini-airplane representing nearby Hayward Airport and a miniature Hayward Cannery water tower which doubles as a lookout. The story behind the colorful playground is as inspiring as its design: the parents of Mia Vazquez, a 10-year-old girl born with a severe form of cerebral palsy, teamed up with the Make-A-Wish Foundation and local institutions and donors to create a space for children with and without disabilities to enjoy equally. 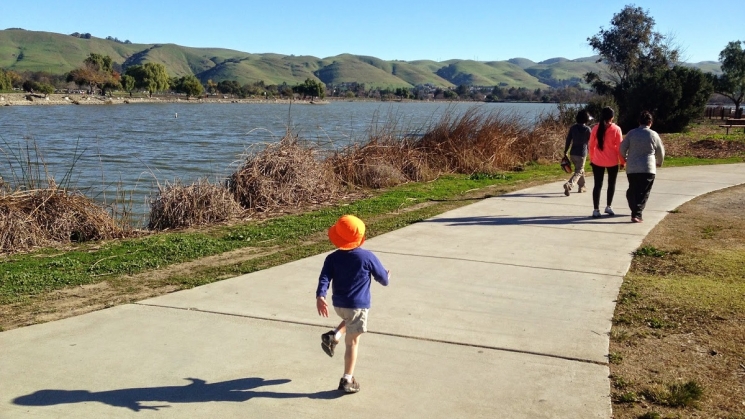 Smaller and lesser known than its New York City counterpart, Central Park in Fremont is nonetheless the beating heart of the city and local communities. Central Park surrounds Lake Elizabeth, an artificial lake named after Fremont’s sister city in Australia and provides acres of green space for families and friends to hang out and exercise. The park has many amenities, from BBQ picnic areas, a skate park, a dog park, tennis courts, and much more. A fun fact: BART runs underneath Lake Elizabeth and Central Park connecting San Jose and Milpitas to the rest of the Bay Area.

Where are you going on public transit this month? Let us know via social media, @SFBARTable #SFBARTable! Keep up with us on Facebook, Instagram and Twitter to see all of the best BARTable events, places to eat or drink and have fun doing around the Bay. 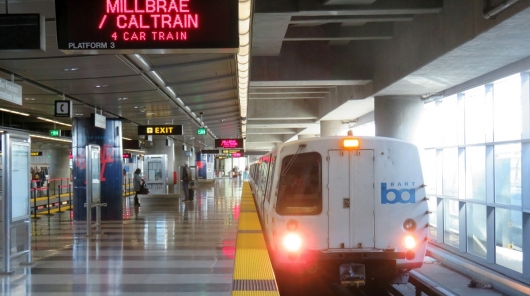 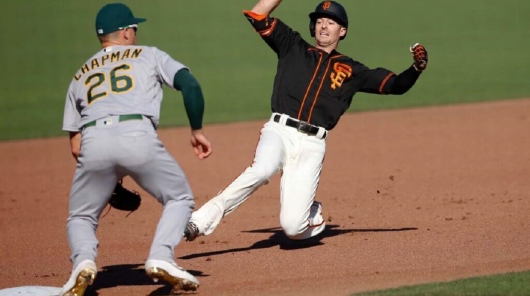 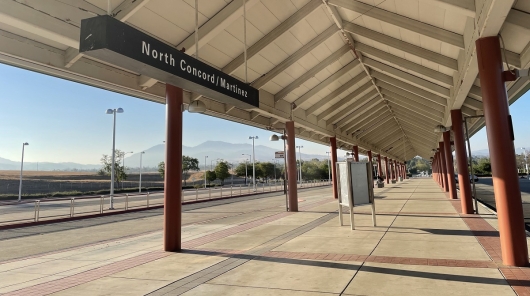